Our planets: Facts about planet Venus

Discover Venus in our special Valentine’s day blog. Did you know Venus is also known as the planet of love?  Venus is also named “the Morning Star” or “the Evening Star”. Want to know why? Read on to learn everything about planet Venus!

Venus is called the planet of love, as it is named after Venus – the Roman Goddess of love and beauty. The origin of the planet’s name is because the planet shines beautifully in the universe. In Western astrology, the planet Venus is viewed as feminine and rules over the Air Sign Libra and the Earth Sign Taurus. Fun fact: Venus is the only planet named after a Goddess.

Venus appears to be a white planet when viewed from Earth. This is due to the planet’s dense atmosphere, which is much thicker than the atmosphere on Earth. It is in fact so thick, that it is poisonous for humans to inhale. However, under the thick, white clouds, Venus is actually red! This red color is caused by the winding roads of lava that flow on Venus. 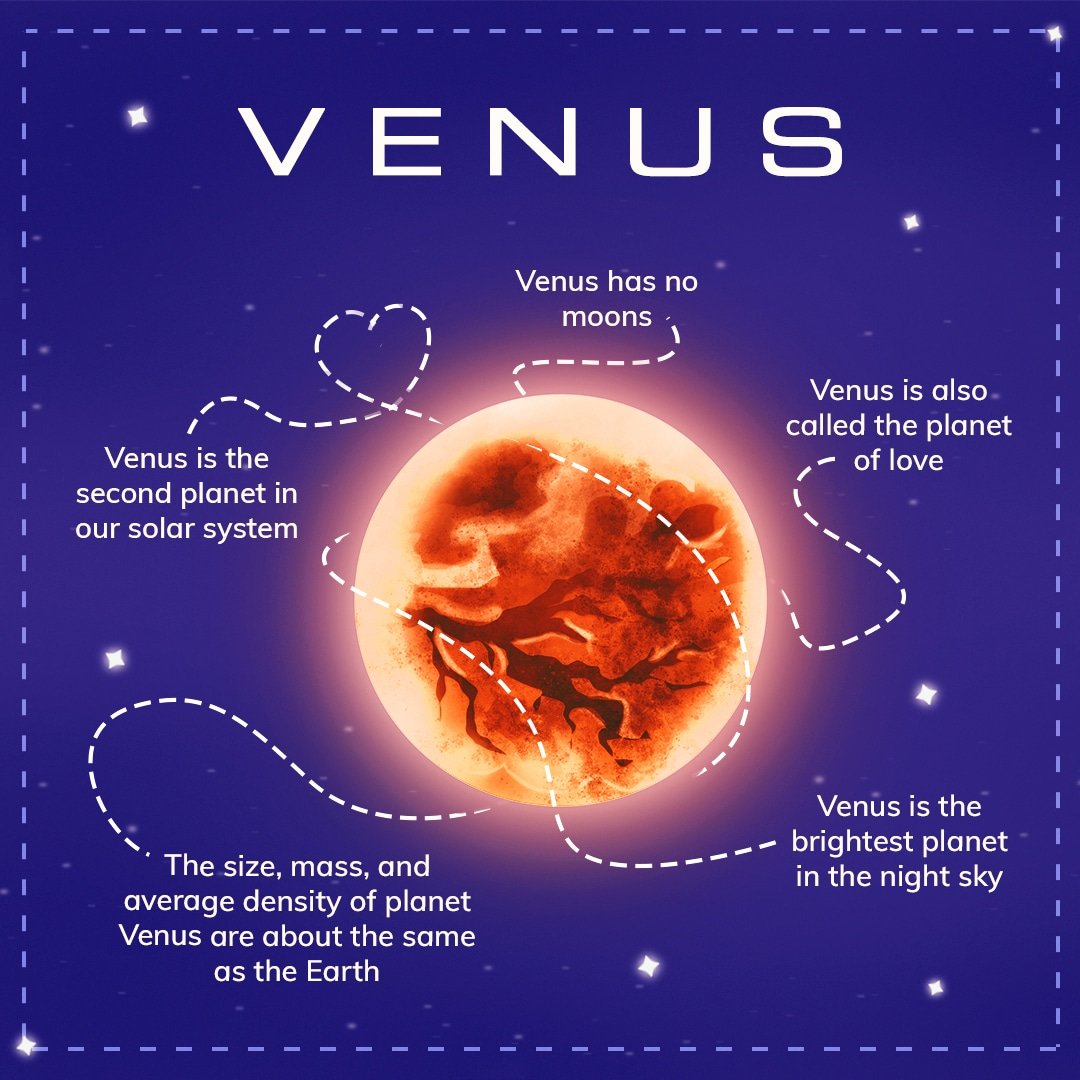 Venus in our Milky Way

Seen from the Sun, planet Venus is the second planet in our solar system. Seen from Earth, Venus is the brightest object in the sky following the Sun and the Moon. Venus is also called the sister of the Moon since, like the Moon, it receives some of the light and heat from the Sun. In addition, it is the brightest planet visible in our night sky. Additionally, Venus is also the hottest planet in our solar system. It is almost 500 degrees Celsius on Venus during the day and nighttime!

Venus compared to other astronomical objects

The size, mass, and average density of planet Venus are about the same as that of the Earth. Venus and Earth formed around the same time: 4,6 billion years ago within the same cloud of gas and dust. In addition, both planets have a diverse surface area consisting of: mountains, volcanoes and impact craters. Venus has even been referred to as the Earth’s twin sister.

Venus has – compared to most other planets – no Moons. Early observers noticed a possible moon surrounding the planet. This moon was named Neith. The observations were later found to be incorrect. Now this supposed companion of Venus is known as “Neith: the lost moon of Venus”.

Is there life on planet Venus?

Venus has many similarities compared to our Earth, which is why there were many speculations about life on Venus in the 19th century. In 1870 the English astronomer Richard Proctor speculated about life on Venus. The Swedish physicist and chemist Svante Arrhenius even described Venus in 1918 as a wet and green planet. However, since the 20th century it has been clear that Venus holds an extreme climate. With an exceptionally high temperature and an air pressure of 90 bar, life on Venus appears impossible.

Venus is located in the orbit between Earth and Mercury. Considering Venus is much further away from the Sun than Mercury, you can often view Venus from the Earth. Being so close to the Sun, Venus is only visible up to four hours after sunset or four hours before sunrise. Therefore Venus is also called “the Morning Star” or “the Evening Star!” This also means Venus is not visible during the day and at night.

You can usually see Venus up to 48 degrees from the Sun. Venus’ apparent magnitude fluctuates between -3.7 and -4.6. With luck and the right place and time, you can see Venus with the naked eye. Nevertheless, we recommend you use binoculars or a telescope. This way you can view all the wonderful details of the planet. Check our essential tips to get the best out of your night as a budding stargazer.

Venus is full of surprises!

In this blog you were introduced to Venus: the planet of love. You now know why Venus is called the “the Morning Star” or “the Evening Star” and what it looks like. In addition, you’ve learned where Venus is located in the solar system and that life on this white planet appears impossible. Look this Valentine’s Day at Venus together, feel connected, and sparkle up your loved one’s life! Travel through our solar system and view our stars and planets with the OSR Star Finder App!