The mystery of one very special rock from Mars

Have you heard of ALH 84001?  Although the name is not that cool, the story behind it certainly is and deserves a full article devoted to it on our blog!

Let’s start by saying that ALH 84001 is the most enigmatic and interesting meteorite ever found on our planet. It has been the subject of interest for numerous physicists, geologists, chemists and, especially, biologists for three decades!

Even after 33 years since it was found, one question still baffles the world: did this stone from Mars bring traces of life to Earth?

The conclusions regarding it are extremely controversial, so read on.

This cool rocky thing was found on December 27, 1984, Antarctica, by a team of American meteorite hunters as part of the ANSMET (Antarctic Search for Meteorites) program.

It is ten centimeters long and weighs 1.93 kilograms. Its Martian origin was determined by chemical analyzes (based on comparison with data from the Viking mission). 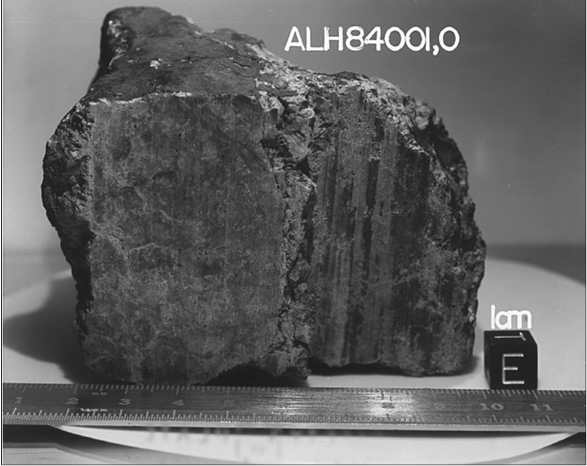 The history of ALH 84001 is long and well-studied. Using radiometric dating methods, it was established that 17 million years ago, a large meteorite hit Mars, which led to a powerful explosion that threw this rock into interplanetary space.

Then the rock wandered between Mars and Earth for millions of years until it was caught by the gravity of our planet. That was 13,000 years ago, and after those 13,000 Earth years it was found and handed over to laboratories for testing.

It attracted a lot of media attention in 1996 when a group of NASA scientists announced that fossils of bacteria from Mars were found in the rock! After two and a half thousand years of speculation and several centuries of intensive searching, evidence has finally been found that life exists, or at least existed, outside of our planet.

Under an electron microscope, unusual structures could be observed in the stone, which are very similar to fossils of bacteria. They are very tiny, 20 to 100 nanometers in diameter, and were smaller than any life form known at the time.

However, the wider scientific community quickly became reserved towards this news and eventually rejected it altogether, after further research showed that the existence of the observed structures can be explained in another way, without the necessary existence of bacteria in the stone.

Nevertheless, despite everything, the news about extraterrestrial bacteria in a rock from Mars is recorded as an important date in the history of astrobiology.

But the stone still remained an object of close study. On the basis of further chemical analyses, scientists have found that it originates from a moist environment, i.e. from the time when there was liquid water on Mars.

Then, in October 2011, isotopic analysis confirmed that the stone was exposed to the influence of material soaked in water and so on.

And as for the possibility that there are fossils of life in the stone, the controversy has continued. Supporters of life point out that the fossil forms in the ALH are embedded in autochthonous material, which is not characteristic of forms created by contamination. But their opponents managed to create similar characteristics in laboratories without the presence of biological material.

This is how this ping-pong scientific debate, in which one side notices something, and then the other responds to it by adding its own remarks, continues. But one thing is certain – this stone will continue to be mentioned in numerous future scientific and professional works, so we’ll keep track of any updates.