In March this year, the American company Rocket Lab presented its new Neutron rocket, a medium-type launcher capable of placing 8 tons in low orbit. The introduction of this launcher marked a radical change in the business model of the company.

Rocket Lab is an American company with a New Zealand heart that has managed to establish itself as one of the few companies that successfully manages orbital micro launchers.

The company was founded in 2006 and was the first private company to launch microsatellites in the southern hemisphere. Today the company is headquartered in California.

Rocket Lab presented a new design for Neutron last week. In fact, the new rocket is completely different from the one we could see in March. The new Neutron plays in a much stronger league than the previous versions and has been nominated as a competitor to rockets such as Antares or Soyuz.

The new Neutron will have a total length of 40 meters and a diameter of 7 meters, with a launch weight of 480 tons. In other words, it is a rocket of significant dimensions and performance. In fact, the new Neutron will be more powerful than the Ukrainian rocket Zenith.

The main change is that the launcher will now use methane as a fuel instead of kerosene. Methane is a more efficient fuel and is better when it comes to reuse. The top is 5 meters in diameter and will obviously be able to be used more than once, which will save the company a good amount from each mission. Instead of aluminum or steel, the hull will be made of composite materials. They are lighter but can cause problems with cryogenic fuels. 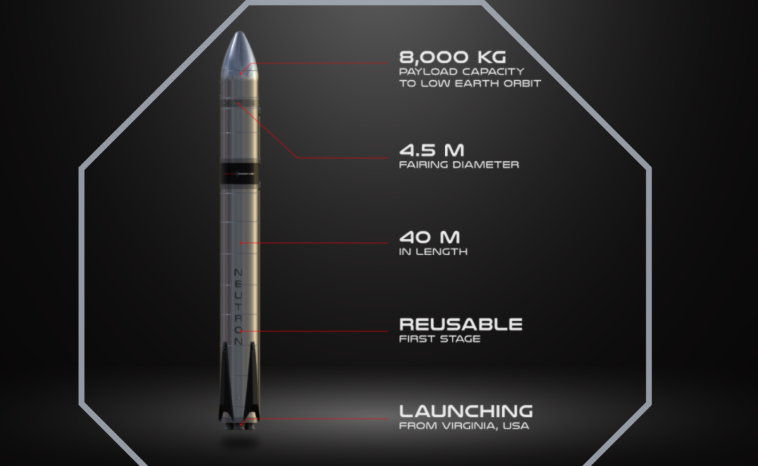 The plump shape will enable the rocket to better disperse the temperature. It will not use heavy landing equipment, but fixed legs with shock absorbers. As for the second level, Rocket Lab assures us that it will be the lightest on the market in proportion to its dimensions. It won’t have to withstand typical stresses and compressions.

Neutron will land ashore after each mission and, for now. The RTLS (Return Tolaunch Site) maneuver to return to the launch site consumes more fuel than when landing on a raft, but apparently Rocket Lab values ​​the speed and simplicity of this recovery strategy more, as they aim to launch a rocket as quickly as possible.

In fact, Peter Beck, the CEO of the company, stated that the rocket was designed to perform one launch per day, but it is clear that no scientific space program requires daily launches. Today, only aggressive military projects have demands for such solutions. The Neutron will be mounted upright and thus transported to the launch pad to save on vertical installation equipment.

What can we expect

The transition to methane fuel means that Rocket Lab must construct a new engine and this engine will be called Archimedes. Its thrust will be 1 meganewton. The first stage will use seven units, while the second will have only one adjusted vacuum (with a thrust of 1110 kilowatts). The company expects to start testing the ignition of the new engine next year in New Zealand.

The new Neutron will take off from the MARS launch center on in Virginia. Neutron is imposing itself as a direct competitor to other rockets, especially now that the company aggressively wants to specialize in the construction of satellites and spacecraft.

On the other hand, Peter Beck does not rule out the use of Neutrons for manned flights, but for now he does not plan to design a ship capable of carrying astronauts. The first test flight is still scheduled for 2024. As for the price per mission, it’s still unknown how much it will be, but, logically, the goal is to be as competitive as possible.

Neutron seems to have a very original and attractive design. Obviously, this new design is much riskier, but it is clear that Rocket Lab does not want to limit itself to constructing a more or less traditional launcher that will be obsolete as soon as it takes off for the first time.