The launch of Artemis I is coming, and now is the right time to renew some old information. Finally, after half a century since man walked on the moon, the conditions have been met for people to visit Earth’s natural satellite again. To this end, NASA launched the Artemis program, within which three missions are to be carried out.

This, of course, if everything goes well until then. The names of the crew members are not yet known, but it is known that at least one member will be a woman, the first to walk on the moon.

NASA’s ambitions are actually much bigger than just visiting the Moon. The plan is that, after the Artemis III flight, the construction of a permanent manned base on the moon will begin, and then that these bases will be the starting point for a much further journey, a journey to Mars.

During the missions, the Artemis crew will stay and live in the Orion capsule, which is designed to enable the life of a four-member crew in deep space for twenty-one days.

Orion will be transported to the Moon by a huge 98-meter-high Space Launch System (SLS) rocket.

When it reaches the orbit around the Earth, the upper stage of the rocket will separate and be directed towards the Moon by its own engines, carrying, of course, Orion and the European Service Module.

Orion itself cannot land on the Moon, so when that happens (during the Artemis III mission), the Orion crew will transfer to a modified Starship spacecraft that will be in orbit around the Moon and will use that ship to finally land on the surface satellite.

The first mission of the program is Artemis I. It will be an unmanned test. The launch is expected to be on August 29th, with fallback dates of September 2nd and 5th.

The mission should last 4 to 6 weeks, depending on when the launch vehicle is launched. If everything goes well, Orion will go from orbit around the Earth to the Moon, and then return.

This flight will be followed by Artemis II, a mission planned for May 2024. At that time, Orion will also have a four-member human crew. The mission will last ten days. 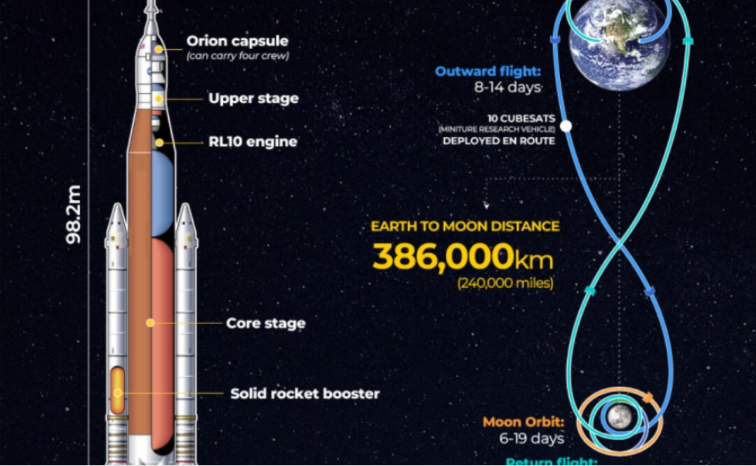 The plan is to fly around the moon and then return the crew to Earth, so without landing on the moon. Those familiar with the Apollo program will notice certain similarities between the Artemis II mission and the December 1968 Apollo 8 flight.

Artemis III finally takes (wo)men to the moon. This mission is planned for 2025 or maybe a little later, but certainly not earlier. Artemis III differs from the Artemis II mission in the finale.

There, the astronauts will spend six days days performing the planned tasks, after which the Starship will transfer to lunar orbit, enter Orin and finally head for Earth.

The question is where the astronauts will land. Earlier crews, those from half a century ago, descended near the Moon’s equator. This time, however, the plan is to land the crew near the south pole of the Moon.

The South Pole is interesting because of the water that exists in that area in the form of ice in some deep craters, but also in regolith, the fine dust that covers the surface of the Moon. And water is, of course, important for a permanent base on the moon.

NASA has designated 13 areas that are interesting for landing. Each covers about 15 square kilometers of surface and in each there are ten or more possible landing spots.

All these locations have a flat terrain, which is necessary for a safe landing. This means that the exact landing place will be determined after the launch.

There are of course many unknowns in the whole mission. One is how much water and how it can be extracted from the regolith. In order to find out, NASA plans to send robotic rovers that would deal with these researches.