When a giant star explodes at the end of its life, it throws its outer layers into space, and what remains of the entire, once powerful star is its core of enormous mass which is almost entirely composed of neutrons. That’s why this remnant is called a neutron star. The material of that sugar cube-sized star here on Earth would weigh several billion tons.

A neutron star is what is left after a supernova explosion. In other words: a giant star explodes and, in that explosion, throws its outer layers into the surrounding space, and the core that remains is a neutron star.

Occasionally, two neutron stars collide, a colossal event that reveals their interior to scientists, and which, they say, are key events for understanding the universe. During the approach and merger of two neutron stars, gravitational waves are emitted, followed by a huge explosion that can be seen from all over the Earth as a brief flash. In such collisions, heavy metals are created, which are the material from which the planets are formed. 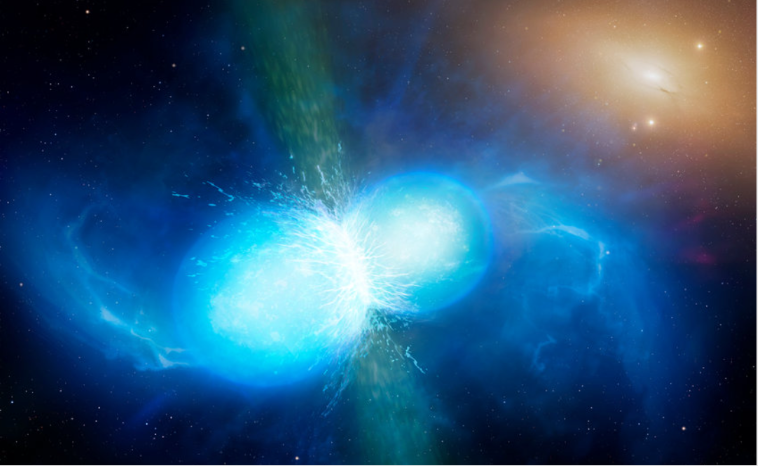 But collisions are rare and short-lived events and their quick location and observation is of extreme importance. That’s why astronomers have organized themselves into a network of observers that reacts to the detection of gravitational signals by three detectors: LIGO, VIRGO and KAGRA.

For this task, the Gravitational Wave Optical Transient observer (GOTO), a special observatory capable of observing the explosions caused by the collisions of these stars, was built in Great Britain. The observatory is set high above the clouds on the volcanic Spanish island of La Palma.

The telescope has an interesting shape reminiscent of rocket launchers. In the short term, it scans the sky as the operator’s goal is to locate the gravitational wave as soon as possible. The stars, planets and galaxies that were recorded the previous night are removed from the captured photos by means of software, so that only a new object remains on the image, i.e. a colliding neutron star.

After that, there are analyzes that will deepen the knowledge of the universe at least a little.