Have you ever planted seeds to make a vegetable garden? You needed water, light, and fertilizer to make it grow. How well the did the garden grow? Read on to find out why some gardeners plant by the phases of the moon.

For thousands of years, back to the time of the Egyptians, farmers planted and harvested based on moon phases.  Until the time of Julius Caesar the calendar was primarily lunar. Caesar decided to reform the Roman calendar with the help of Sosigenes, a Greek-Egyptian astronomer. He ordered the Romans to disregard the moon in calculating calendars. We know that calendars were important to agricultural people, allowing them to predict when to plant and harvest crops, or to breed their livestock.

What is Planting by the Moon?

Planting by the moon is based on the scientific fact of the gravitational pull of the moon. This pull, which draws the moisture in the earth to the surface, aides in the germination of seeds. In 1925 researchers conducted several studies on seed germination during moon phases.

“Water weight in a botanical sample can vary up to 10% between the days just before the full moon and the week before the new moon.”

Throughout the 1930’s and well into the 1970’s researchers discovered a similar occurrence in lumber.  Wood from spruce and chestnut, harvested in the last week of the moon phase, had the lowest water percentage and shrunk the least during drying.

The Science Behind It

Isabella Guerrini, at the University of Perugia in Italy,has made a study of the effects of moonlight on plants. She states that we know moonlight, while generally similar to the sunlight it reflects, shifts a bit towards the infrared. She has speculated that the rhythmic, additional irradiation from moonlight is important to the growth and metabolism of healthy plants.

“Not only have we seen change in growth and leaf movements, but also in patterns of starch storage (highest in the waning phase) and utilization (highest in the days before the full moon). These effects, along with preliminary documentation of immune  deficiency and poor wound healing from moonlight-deprived plants, encourage us to think of moonlight as an important part of a plant’s overall “nutrition”.” (Guerrini)

Moonlight is only 15% as strong as sunlight, but its rays penetrate the soil, and affect plant life from germination to harvest. Most plants seem to need a rhythmic exposure to moonlight. Having that exposure for at least a week or so around the full moon will allow regeneration and growth. 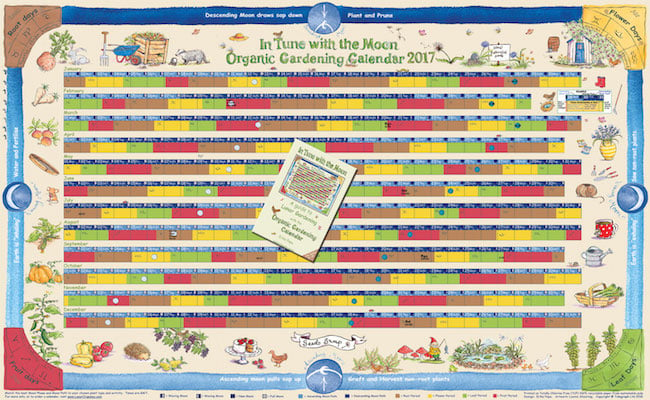 How To Plant By Moon Phase

With these principles in mind, moon planters should do the following after a new moon:

1) Plant leafy or shallow root crops during the first or second quarter increasing.

2) Plant trees and other tough-rooted systems during third quarter decreasing.

“In the event of a lunar eclipse, it is best to leave your garden alone until the eclipse ends.”

People that have planted by the moon phases for years suggest that growers heed the lunar cycle. Not simply for potency and low water content, but because many plants (especially strong, vigorous growers) recover better when they are harvested during the last week of the lunar cycle.

Maybe this year you could try to plant your garden by the moon phases. Keep a journal of your discoveries and compare it to last years garden. It will be interesting to note what, if any, changes you encounter. Good Luck !