In 2015, ‘New Horizons’ passed by Pluto. Scientists worldwide were baffled as the former planet is in every sense more complicated than anyone imagined. In fact, it turned out to be far more interesting than 99% of the bodies of our system.

In 1930, Clyde Tombaugh discovered Planet X, which was later named Pluto. Interestingly, when Pluto was discovered at the Lowell Observatory, people from all over the world suggested names to astronomers.

The name Pluto was suggested by Vinisha Barney, an 11-year-old girl from Oxford, who thought that the name of the Greek god of the underworld was perfect for a distant foggy planet.

Although Pluto was believed to be a planet for 76 years, it is actually the second dwarf planet in our solar system, with mass as the criterium. After the descent of Pluto into the rank of a dwarf planet, Pluto’s official name is “asteroid number 134340”.

Furthermore, Pluto has five satellites, the largest being Charon. Charon is almost half the diameter of Pluto and is sometimes considered a binary system because their orbits interact with each other.

The unusual stain on Pluto

In the blurry images taken by the Hubble Telescope, from a distance of 6 billion kilometers, and then again during the approach of ‘Horizons’, a gleaming stain on the surface of Pluto stood out. Everyone thought it was a sandy desert or maybe even ice. The creation was soon named Tombaugh Region and its brightest part after the first artificial satellite – Sputnik. Many questions remained unanswered, and each answer drew dozens of new questions.

The unusual region probably formed as an impact basin that collected volatile ice over time. The size of the hypothetical body that hit the surface was estimated at 150-300 km, which is huge considering that Pluto is smaller than, say, Russia.

Alternatively, there is a possibility that the accumulation of ice in this place lowered the surface with its weight, which led to the formation of a basin in which several kilometers of thick nitrogen ice accumulated. The lack of any visible craters suggested that the surfaces were about 180,000 years old.

Pluto does have an atmosphere

It was soon confirmed that Pluto has an atmosphere which is not great for our conditions, but still an atmosphere composed of methane and nitrogen, which changes in 300-year cycles. To make matters weirder, the 1000 km wide region called Sputnik is listed as the main reservoir of atmospheric nitrogen. 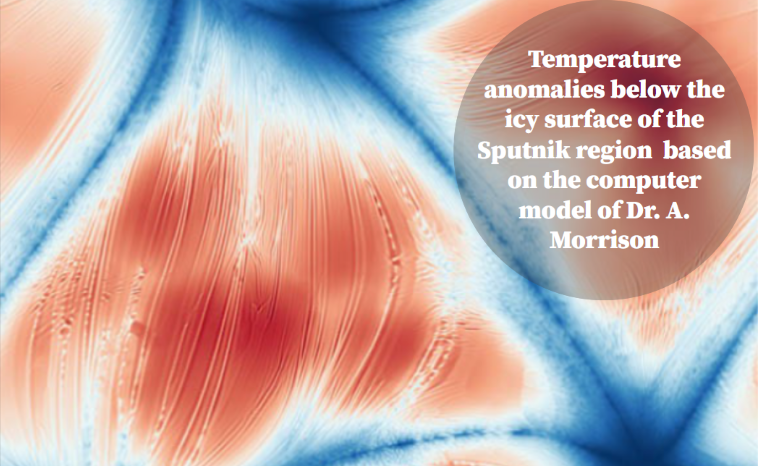 But there was no end to the wonders hidden by Sputnik – detailed images showed a stunning pattern of flat polygons about 30 km wide separated by narrow riverbeds. This characteristic was a sign of thermal convection inside the ice mass, which is constantly renewing its surface. So far, the initiator of this process has been a mystery.

However, in their study published on December 15, 2021, in the elite journal ‘Nature’, researchers from the French national center CNRS, the High School of Lyon and the University of Exeter reveal the mystery of the formation of these structures.

Despite the low level of solar radiation, nitrogen ice regularly sublimes here, i.e. it turns directly into a gas without first becoming a liquid.

This sublimation results in local cooling that causes ice layer shifts in time spans measured in 100,000 years, which is comparable to the speed of tectonic plates moving on Earth.

The process is more reminiscent of the movement of our oceans than the behavior of ice sheets on the moons Jupiter and Saturn. It can also appear on the surface of other planetary bodies such as Triton, Neptune’s moon; or Eris which is among the largest objects in the Kuiper Belt.