As stated in our previous post about NASA’s Artemis program, just 40 minutes before the start of the SLS rocket engine on Monday, August 29, the launch was canceled due to a failure in the supply of liquid hydrogen used to cool the engines. So, what happened next?

The very next day, it was determined that the malfunction was not fatal for the mission, i.e. that it could be fixed quickly, and it was decided to try the launch again on September 3.

The weather conditions over the launch center were favorable and the launch window two hours. Sadly, the same problem that led to the cancellation of the previous launch occurred again. This is why the countdown was stopped.

In the simplest terms, the rocket is leaking fuel, the valves are not sealing, the rocket engines are not able to work in the normative regime. Astronautics does not tolerate mistakes.

At every takeoff of rockets or any creation in the domain of aeronautics and astronautics, everything must be perfect. Problems, cancellations and disasters are reduced to a minimum in this way. Rockets, spacecraft, airplanes, probes will never get permission to take off if all the “lights are not green”.

However, we must know that all these things are the most normal thing in the engineering world. Sooner or later, the problems will be solved and Artemis I will go to the moon.

Even if a catastrophic event occurs along the way, after launch, it can only slow down the entire program. If the problems are not solved in the coming days, the rocket will have to go back to the big hangar, and that already means postponing the launching to next year.

This would significantly disrupt the entire timeline of the Artemis I, II, III missions, which, by the way, is really optimistic. NASA has invested great knowledge, technology, experience and money in the odyssey of returning mankind to the moon.

Will we return to the moon? No doubt, it’s just a question of when.

Meet the “astronauts” flying in the Artemis I mission

Although there are no astronauts in the capsule of the spaceship Orion, the seats are not empty. Three of the four are occupied. There are “technical astronauts” on them – mission Commander Moonikin Campos, a special humanoid dummy designed to test the effects of acceleration and vibration on the human body. 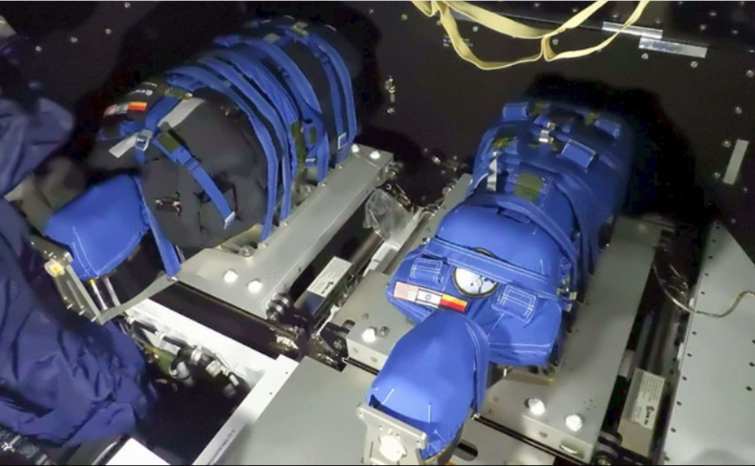 It was named after engineer Arturo Campos, a man who was instrumental in the rescue of the Apollo 13 crew (1970). The Commander Campos doll wears an astronaut suit identical to the one humans will wear in the manned missions that follow.

There are also astronauts Helga and Zohar, anatomical humanoid torsos that will be used to examine the effects of radiation on the organs of the human body during long-duration missions outside the Earth’s orbit.

The insides of their torsos represent faithfully reproduced human anatomy with sensors that act as the heart, kidneys, lungs, reproductive organs. One doll is “naked” and the other is “dressed” in an astronaut’s ordinary, inner, work suit.

But it’s not just puppet-astronauts in Orion. There are other interesting things like the museum part of the rocket engine from the Apollo program, a few grams of the lunar surface that the astronauts collected during their stay in the seventies.