How ‘Mriya’ and ‘Buran’ flew to Paris together

The vertical stabilizers on Soviet’s largest planes (Antonov’s An-22, Tupolev’s Tu-95 and Ilyushin’s Il-76) made it impossible to place bulky cargo on the fuselage. It would create a strong aerodynamic instability that could result in the loss of the aircraft. Care to know what they came up with to solve this grand issue?

What the bureaus proposed

To avoid this problem, the Boeing 747 SCA had two additional small vertical stabilizers on the tail, and, in addition, the shuttle had to pull a special aerodynamic cone that covered part of the main engines.

But the An-22 ‘Antej’ looked promising, thanks to a standard configuration with two vertical stabilizers.

Antonov’s bureau concluded that a dedicated version of the An-22 would have to be developed to carry parts of the ‘Buran’ projectile rocket, and that it would continue to have serious aerodynamic problems.

Of course, the transfer of the central degree of ‘Energy’ was considered impossible. In order to overcome this obstacle, Antonov’s bureau proposed that the ‘Energy-Storm’ systems be transported with the new An-124 ‘Ruslan’, which was supposed to be the heaviest cargo plane in the world.

The disadvantage was that the An-124 was still in development at the time, and it also had a vertical stabilizer, so a modified version needed to be reintroduced.

While Antonov’s bureau was making the decision, Myasishchev’s project bureau proposed a redesign of the old ‘3M’ strategic bombers for the task. The option seemed strange, since the ‘3M’ was a relatively small aircraft compared to the An-22 or the future An-124, as it barely had internal cargo space.

But Myasishchev’s calculations showed that the plane could carry about 50 tons of cargo on its back. Although it would not be able to carry the entire shuttle, it could carry an unfinished orbiter or central stage elements.

The idea seemed a bit eccentric but was approved in December 1977 for lack of a better alternative.

In the end, three ‘3M’ bomber-tankers were modified for that task, with one of them being intended for aerodynamic tests. The units were christened ‘VM-T’ and nicknamed ‘Atlant’ (‘Atlas’ in Russian).

VM-T transferred the first elements of the central stage of the Energy rocket to Baikonur in 1982. A year later, the first shuttle transmission tests began using the ‘Burana’ model, although on one of these test flights the combination slipped off the runway during landing, demonstrating the limitations of the ‘VM-T’.

During the trip ‘2K’, ‘Atlant’ lost two of its four jet engines before landing, but the crew managed to get out of the incident, another reminder that the combination ‘VM-T’ – ‘Buran’ flew at the limits of its performance.

It was clear that the ‘VM-T’ was not ideal for transport, but, since it was operational, it made no sense to develop a specialized version of the An-22, which would be only slightly better than the ‘Atlanta’.

Finally, Antonov proposed an increased version of the already huge An-124. This new giant would have a maximum takeoff weight of 640 tons and could carry up to 250 tons of cargo.

A design bureau based in Ukraine decided to give it a Ukrainian name instead of a Russian one, calling it Mriya, ‘dream’, which was a remarkable gesture at the time. 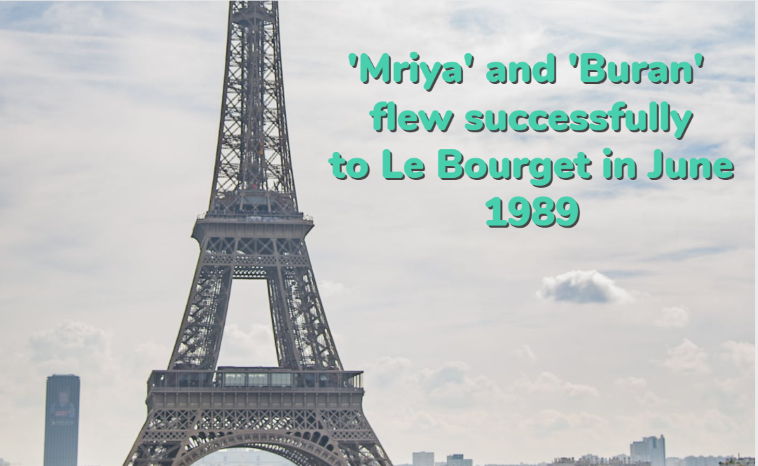 The combination later flew successfully to Le Bourget in June, where it was presented to the Western media. After returning from France, ‘Mriya’ returned ‘Buran’ to Baikonur, where it remained until recently.

Unfortunately, this was the last time a giant plane carried a mythical shuttle on its back.

‘Mriya’ lost its reason for existence and in 1994 the only specimen landed in Kiev, only to take off again in 2001, when it was renewed for cargo flights, missions for which, paradoxically, it was not optimized.

The only copy of the An-225 was sadly destroyed this year. A sad end to a project that promised to show that the sky is not the limit.

Did you know that here at OSR you can name stars?