Check out our list of completely simplified explanations of what one should know to easily read an ordinary newspaper article about astronomy. Perhaps you want to be able to participate in a meaningful conversation on astronomical topics, or at least know how to ask questions, so let’s start with the first 7 terms we picked for Part 1 of this series.

A science that studies objects and phenomena outside the earth and its atmosphere. It is the study of the stars, planets, and the universe, as it is.

Originally, the atom was thought to be an indivisible, that is, basic particle. It is the smallest brick of which everything material is made. This is roughly how the atom was defined by Democritus of Abdera, back in ancient Greece. Later it turned out that the atom is not indivisible but consists of even smaller particles.

That is why today the atom is defined as the smallest part of any chemical element, for example iron, oxygen, etc. consisting of electrons and nuclei made up of neutrons and protons.

The law states that nothing material can travel faster. Also, only matter that has no mass can travel at that speed. Photons have no mass, so they can move at speed c. Material bodies that have mass, even if it is a speck of dust, can only approach that speed, but it cannot reach it. Here’s why: moving at high speeds causes some strange consequences. The faster a substance moves, the more its mass increases. If the mentioned speck moved at speed c, its mass would be infinite. It turns out that a particle would have to have a “more infinite” mass than an infinite one in order to travel faster than light, which is pointless. Another consequence: when moving at high speeds, the distance in the direction of movement decreases. If something travels at speed c the distance becomes zero! And something else confusing: the faster you move, the slower your time flows. At c speed, time stops completely.

So, if something moves at the speed of light, its mass (if there is any) becomes infinite, the distance to the goal is zero, and time stands still. Wherever you go – you have already arrived!

The gravitational force of a black hole is measured by speed. We see the world thanks to our ability to perceive light rays. Now, if the light is not able to come out of the black hole it means we can’t see the black hole! That’s why we call these objects black holes. Black because they can’t be seen, and holes because things can fall into it. 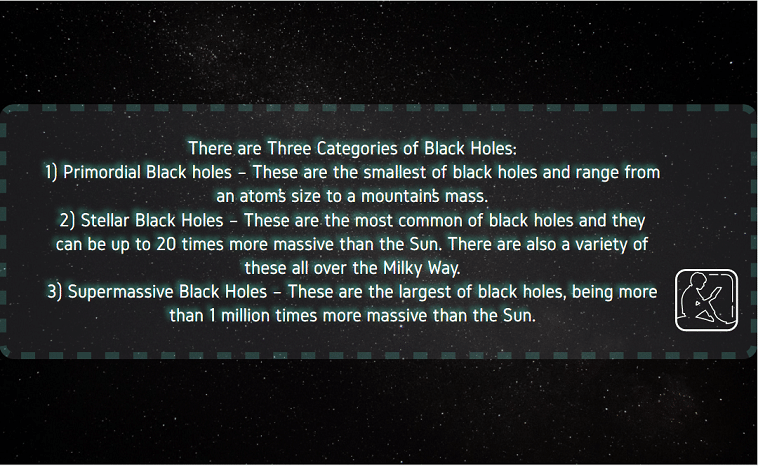 So how do we detect a black hole when we don’t see it?  The answer is: thanks to the consequences it causes in its environment. Its strong gravity distorts the environment and affects all the celestial bodies in the neighborhood. So, if you see a star moving strangely, say, circling around nothing, then this might be a good sign that it is circling around a black hole.

You know the one with the locomotive whistling: when it is moving towards us the sound gets higher and higher, and when it moves away it becomes lower and lower. That’s because of the infamous Doppler effect. The Doppler effect is valuable in astronomy.  When a body that produces waves (light or sound) approaches us, those waves reach us in shorter intervals. If the body moves away from us, then the waves reach us at increasingly longer intervals!

A white dwarf is what remains at the end of the life of a small or middle-sized star. But before that, this star slowly expands more and more to enter the phase of the red giant, after which it releases its upper layers into space and thus a planetary nebula is formed. At the center of the planetary nebula remains a white dwarf star. Such is the fate of the Sun.

Galaxies represent a group of gravitationally connected stars. Of course, that’s not all. They also contain strong dusts, different gases, particles, radiation, and various bodies that we cannot see with our bare eyes. In terms of size, there are dwarf galaxies that contain only ten million stars, but also giant ones with hundreds of billions and even billions of stars. By shape, there are those that are elliptical (there is no dust in them that is suitable for the creation of planets, so they are not suitable for life), then spiral ones (there is dust, so they are ideal for the possible formation and development of life) and irregularly shaped galaxies. In total, there might be more than 100 billion, maybe twice as many galaxies out there. Galaxies are vast in size, from a thousand to hundreds of thousands of light-years.

“Astronomy compels the soul to look upward and it leads us from this world to another.”- Plato, Philosopher

Stay tuned, until next time!