Epsilon Boötiis is also known as Izar from the Arabic word meaning ‘veil’ and Pulcherrima which is Latin for ‘the loveliest’. In 1973 a Scottish astronomer and science fiction writer, Duncan Lunan, said he interpreted a message from the 1920s probe orbiting the Moon. He claimed the message was sent to the probe from the inhabitants of a planet orbiting Epsilon Bootis.

Izar is located 300 light-years away in the constellation of Bootes (the herdsman). This constellation is the 13th largest in size (out of the 88) and is home to Alpha Boötis (the third brightest star in the night sky) and three meteor showers. It also occupies about 907 square degrees in the night sky and belongs to the Ursa Major family of constellations.

This star can be seen in its home constellation located in the third quadrant of the Northern hemisphere, specifically between latitudes of +90 and -50 degrees. Because this star is so bright it can be seen with the unaided eye; however to see each individual star in Epsilon Bootis you will need a powerful telescope. 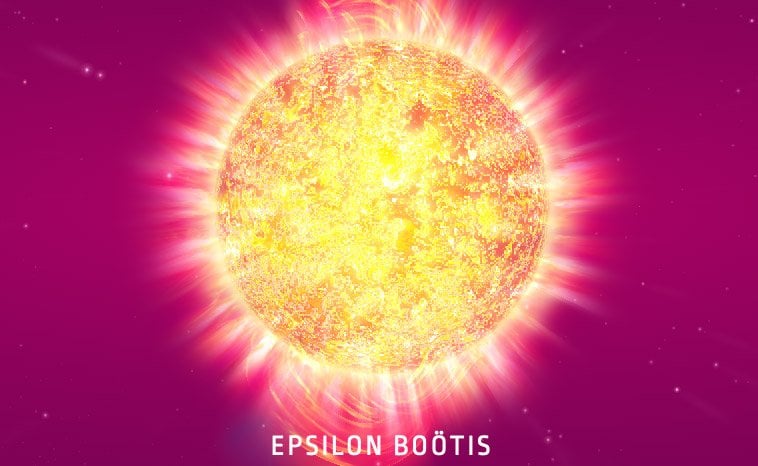 Epsilon Boötis is a two star system with its primary component being a bright orange giant which has already gone through its core hydrogen supply and is well on its way to the next stage in its evolutionary process. It has expanded to be 33 times more in radius than the Sun and four times its mass. The outer envelope of this star is burning at an effective temperature of 4,550 Kelvins or 7,730 degrees Fahrenheit or 4,276 degrees Celsius, which is what gives this star its orange-hue. The companion star is dimmer in nature and is catalogued as a main sequence star. It is a fast rotator moving at a pace of 123 kilometers/second (76 miles/second). Interestingly, by the time the two stars complete their evolutionary process they will have switched places; the dimmer will become brighter than the primary star.

Izar’s brighter component shines with an apparent visual magnitude of 2.37 and is 501 times more luminous than the Sun, while the dimmer companion star is rated at a magnitude of 5.12 (it can also be seen with the unaided eye).

Historically, perhaps the most famous story surrounding Izar is the claim made in 1973 by a Scottish astronomer and science fiction writer by the name of Duncan Lunan. He told a story of interpreting a message from the 1920s probe orbiting the Moon. He claimed the message was sent to the probe from the inhabitants of a planet orbiting Epsilon Boötis. However, even though the story was published in Time magazine, Lunan later presented proof against his theory and why he thought it was a reality in the first place. But strangely enough, Lunan later revoked his withdrawal of his theory.

Epsilon Boötis is not just another twinkling celestial object, it has some cold hard facts and true significance. So if you have a chance to view this fascinating star in the constellation of Bootes be sure to check it out.

Fly to Epsilon Boötis in 3D!