Beta Ursae Majoris makes up part of ‘the Big Dipper’ and is 10 million years-old. This star is one of the hottest and has 3.4 times the radius of the Sun and is 50 times more luminous. It’s also known as Alkaid and Benetnash from the Arabic meaning ‘the leaders of the daughters of the bier’.

Merak is located approximately 79.7 light-years away in the constellation of Ursa Major. It is the 3rd largest constellation in size (out of the 88) and is home to the famous Big Dipper. It also contains several Messiers and has two meteor showers.

This star can be seen in its home constellation located in the second quadrant of the Northern hemisphere, specifically between latitudes of +90 and -30 degrees. Because this star is bright it can be viewed by the naked eye and is specifically located on the bottom righthand corner of the Big Dipper. Merak is also part of the Ursa Major Moving Group. 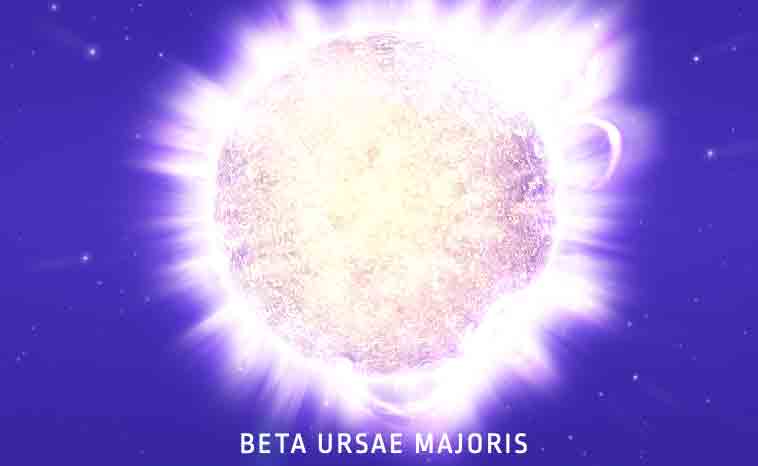 Merak is a main sequence star with a stellar classification of A1 V. It is 2.7 times bigger than the Sun and has 2.84 times its radius. Beta Ursae Majoris also has a circumstellar debris disk of orbiting dust at a radius of 47 astronomical units, which is 0.27 percent of the Earths.

Beta Ursae Majoris is a bright star in the night sky with a visual magnitude of 2.37. It shines approximately 68 times that of the Sun and has an effective temperature (outer envelope) of 9,225 Kelvins or 16,145 degrees Fahrenheit (8,951 degrees Celsius). At this temperature, this is what give Merak its whitish-glow.

Historically, the Big Dipper has played a role in many cultures. It helped guide the slaves from the Underground Railroad due North; a song written had the lyrics “follow the drinking gourd to a better life.” In Native American, this constellation is thought to be a grand bear (the bowl) with the arc of the handle being the warriors chasing it. Legend also has it that each autumn, it is the blood dripped upon the leaves from the wounded animal that turns the foliage red. Greek mythology, Callisto (a beautiful nymph that swore a vow of chastity) was turned into a bear by Hera, the jealous wife of Zeus, after she caught the two of them together. Merak has also been made famous by the popular television and movie series, Star Trek. In the original series (The Cloud Minders), Merak II was supposedly under a botanical plague.

Beta Ursae Majoris is not just another twinkling celestial object, it has some cold hard facts and true significance. So if you have a chance to view this fascinating star of the “loins of the bear” be sure to check it out.