Islamic scholars have made significant contributions to the development of astronomy. During the Middle Ages, when European science experienced a downturn, the Arabs were the ones who preserved the astronomical legacy of the ancient world and developed their own science.

The Arabs are responsible for the link between classical and renaissance scientific achievements, and they left their mark written in the sky in the form of some star names.

About the Arabic star names

Ancient astronomers such as Hipparchus and Ptolemy described the stars by their position within the constellation. They used descriptions such as “bull’s eye” or “star on the beak”.

In the Middle Ages, Arab astronomers adopted this system of marking stars, but with their own names.

This is how most of the Arab star names refer in some way to their position within the constellation.

The Arabs also used some names that come from their independent tradition of believing in the stars.

During the Renaissance in Western Europe, Arabic astronomical books were translated into Latin. As a result of these translations, the Arabic names of the stars and the descriptions of their positions within the constellations have been Latinized into the names we use today.

These names are often conveyed to us in a deviated form that has either changed their meaning or lost it in extreme cases. Other names were transferred by mistake from one star to another, so they can even refer to another constellation (Greek or Arabic) and not to where that star really is.

So, there are a handful of names that seem to be completely out of context, like a star named Nihal, which means “camels that quench their thirst”, and it is in the constellation of the Rabbit! Maybe the name is left from some previous constellation that is authentically Arabic?

“Al” is a definite article in Arabic, (as “the” in English) and is often in front of the name of the star (Aldebaran, Alnitak, Algol…).

However, the use of this prefix has become arbitrary over time, so some names are used without it. The following are descriptions of several Arabic star names. Of course, the list does not include all stars with Arabic names. 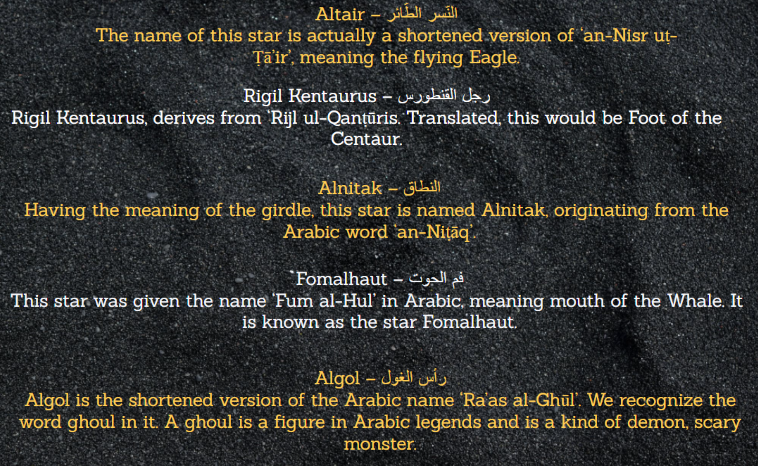 Fun fact: The Arabic alphabet contains 28 letters and is written from right to left. There are no letters that exist in many European languages such as P, V and G, but there are, for example, several variants of the letter H. Most letters are written differently depending on whether they are at the beginning, middle, end say, or when standing alone.

Did you know that here at OSR you can name stars like the Arabs once did?