Alpha Centauri B calls the Centaurus constellation home. It is known by many other names; Rigil Kent, Rigil Kentaurus B, or Toliman. Rigil Kent and Rigil Kentaurus are Roman words derived from Arabic – Rijl Qanṭuris from the phrase, Rijl al-Qanṭuris – meaning “the foot of the centaur,” of which this star marks. Toliman is also derived from Arabic (al-Zulman) meaning, “the ostriches.” Alpha Centauri is the nearest star system to the Sun and is located 4.37 light-years from Earth; 25.8 trillion miles (41.5 trillion kilometers). It is considered a circumpolar South star of latitude 29 degrees South, which means it never sets below the horizon in that area of the world. This is also one of the stars that point to the Southern Cross asterism. 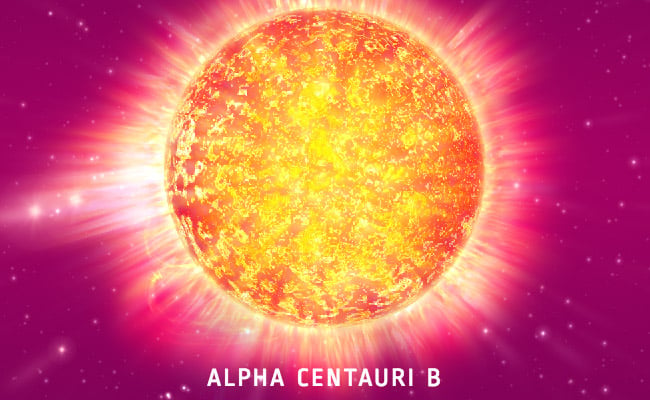 View Alpha Centauri B in 3D!

Alpha Centauri is considered a visual binary star, meaning it appears as one star when viewed with the naked eye. It is composed of Alpha Centauri A, Alpha Centauri B and a third star known as Proxima Centauri (Alpha Centauri C). Alpha Centauri B is a smaller main sequence star with 90 percent of the Sun’s mass and 44.5 percent of its brightness. It has a 14 percent smaller radius than the Sun and shines with an orange-color. This star completes a rotation every 41 days and is also emits more X-ray energy.

The Alpha Centauri star was first discovered by an English explorer, Robert Hues and was listed on his Tractatus de Globe in 1592. But its historical significance doesn’t end there. The Chinese culture know this star as “The Second Star of the Southern Gate,” in reference to the asterism it forms with Epsilon Centauri. In Australia, Alpha Centauri (and Beta Centauri) are known as Bermbermgl. The Boorong tribe of Northwestern Victoria believe these stars symbolize two brothers (who were considered heroes) who killed the Emu; represented by Coalsack Nebula in the Crux constellation. Because of Alpha Centauri’s position in the heavens, there are no Roman or Greek mythologies associated with it; however, our popular culture has borrowed its presence for such hit shows as, Star Trek, Lost in Space, Babylon 5, Transformers and Avatar to name just a few. Interestingly enough, Alpha Centauri was first discovered by a Jesuit Priest in Puducherry, India, not an astronomer. Jean Richaud was observing a passing comet when he observed this binary delight.

Alpha Centauri B is not just another twinkling celestial object, it has some cold hard facts and true significance. So if you have a chance to view Alpha Centauri B, be sure to take a peek at one of the most intriguing views you may ever experience.

Fly to Alpha Centauri B in 3D!