Alpha Andromedae is a binary star that shines the brightest in the constellation of Andromeda and is 200 times more luminous than the Sun. Before the 1930’s this star was once a part of the constellation Pegasus and was actually considered the fourth brightest star there. Its Arabic name literally translates to “the Navel of the Horse.”

Observers will be happy to know this star is visible to the unaided eye and can be seen from all latitudes north of 60 degrees. If you are in the midlatitudes, Alpheratz is best viewed in the evenings from August through October when it is high in the sky. To locate Alpheratz look for the Great Square of Pegasus. It is the star that connects the Andromeda constellation to Pegasus. 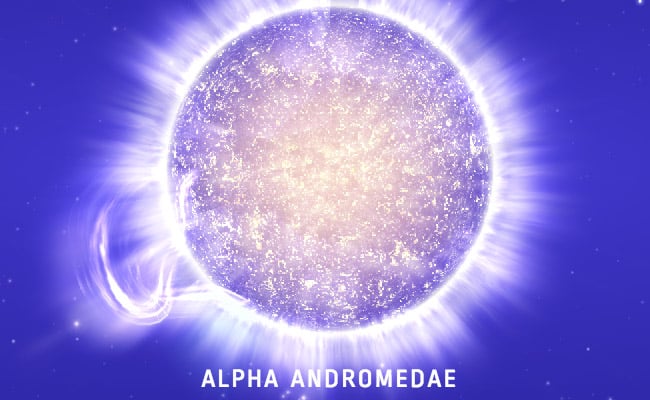 Although, Alpha Andromedae appears as one star in the night sky it is actually a binary star. The primary component is a hot blue star with a classification of B8 subgiant. The brighter of the two stars shows high levels of mercury, manganese, gallium and xenon. It has 3.6 solar masses and also burns at a whopping 13,800 Kelvins; 24,380 degrees Fahrenheit or 13,526 degrees Celsius. The dimmer companion star is an early-type A star which has approximately 1.8 solar masses and burns with a surface temperature of 8,500 Kelvins; 14,840 degrees Fahrenheit or 8,226 degrees Celsius. The two stars do a complete orbit around each other every 96.7 days.

Alpha Andromedae is the brightest star in its home constellation and also the brightest mercury-manganese star known today.. It shines (along with its close companion) at a combined apparent visual magnitude of +2.06. The primary star is 200 times more luminous than the Sun, while the dimmer of the pair is about 10 times that of the Sun. The primary star has also been found to have a slight variability to its brightness, which has been determined to be caused by the mercury line during the stars rotation. However, the change in brightness is not significant and is measured in at less than 0.01 magnitude.

Before the 1930’s Alpheratz was given the designation of Delta Pegasi (or the 4th brightest star in Pegasus). After that this star was given the designation as a part of Andromeda by the International Astronomical Union. Although, it did take some time for Alpheratz to be officially recognized as part of Andromeda, it is today. We do know early Arabians considered Alpha Andromedae to be a part of Pegasus because its name literally translates to the “navel of the horse.” However, some ancient Arabic writings refers to this star as, rās al-mar’a al-musalsala, “the head of the woman in chains,” referring to Andromeda, so we can conclude that even early stargazers were uncertain as to where to place Alpheratz. In China this star was called, Bi Su, meaning “the wall,” and shared its designation name with y Pegasi with a Andromedae being, “the second star of the wall.” In addition, it is also known as “the Three Guides,” that gives blessings and riches to all those born under its guidance.

Alpheratz is not just another twinkling celestial object, it has some cold hard facts and true significance. So if you have a chance to view the brightest star in the Andromeda constellation be sure to take a peek at one of the most intriguing views you may ever experience.

Fly to Alpha Andromedae in 3D!