A Local cluster of galaxies (or Local group) is a set of mostly dwarf galaxies that are gravitationally connected and located within a circle of one megaparsec*. However, that distance is not so important for group membership.

The Local group by Hubble

In order for a galaxy to remain a member of the Local group, its speed of movement is also important. If it moves very fast it can break away from the gravity of the Local group and go beyond it. But, to put it simply: these are galaxies that are under the dominant influence of gravity of all galaxies in the group.

The largest members of the Local group are the Great Galaxy in Andromeda, followed by the Milky Way, the Triangle Galaxy and Mepheus. The other members are small, dwarf galaxies.

The name of the Local Group of Galaxies is written with a capital letter “L” because it is the proper name of the group. This name was given to it by Edwich Hubble after he discovered, first, that galaxies are moving away from each other, and then that some galaxies are grouped in our galactic neighborhood.

He named this group of galaxies in his 1936 book, The Realm of the Nebulae, the Local group.

By the way, only 11 members of the Local group were known in Hubble’s time.

The number of group members is unknown for two reasons.

In 2018, one such member was discovered. It is only 130,000 light-years from the edge of our galaxy. It has not been noticed before for several reasons.

First of all, it is quite dark, has a low density and is barely noticeable. But except for all that, it is located, seen from the position of the Earth, behind the galactic, very shiny disk of the Milky Way, which further masked it. 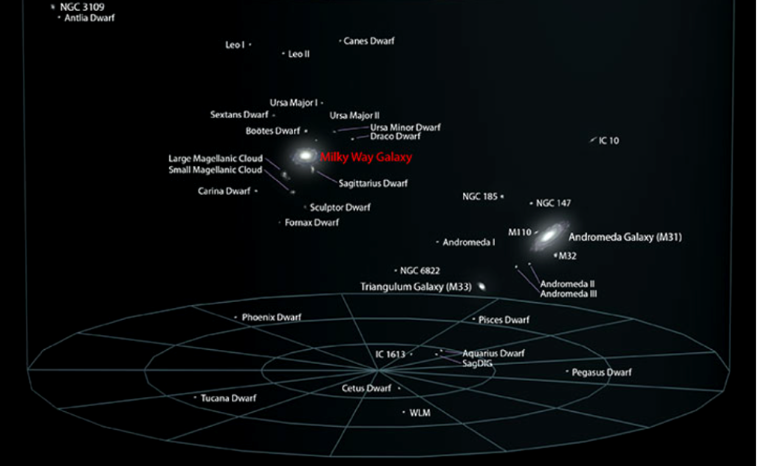 The galaxy was named Antlia 2 (or, for short, Ant 2). It is described as a ghost galaxy because it is transparent and dark, although it is quite large for a dwarf galaxy.

It is similar in size to the Great Magellanic Cloud, the largest satellite of the Milky Way, which is 7,000 light-years in diameter (14,000 according to some data). However, it is 10,000 times paler. And it has an unexpectedly small mass for its size.

Some members of the Local Group can also be seen with the naked eye. Apart from our Milky Way, you can also see the Andromeda Galaxy, the Triangle, the Large and the Small Magellanic Cloud.

The largest member of the Local Group is the Large Galaxy in Andromeda, better known as M31. So, Andromeda may have billions of stars, while for the Milky Way it is not certain whether there are 200 or 400 billion, but somewhere in between it is certain.

But recently it turned out that the Milky Way is both more spacious and more massive than we have thought so far. In any case, the center of mass of the entire Local Group of Galaxies is somewhere between these two galaxies.

* As we’ve said before, a megaparsec is a million parsecs, and a parsec is the distance from which one astronomical unit (AJ = 150 million km) can be seen at an angle of one arc second. In short, very far.