“A human being born at one of Uranus’s poles would be a middle-aged man at sunset and a very old man before it was time for a second sunrise.” ― Isaac Asimov, The Relativity of Wrong

Although not the farthest planet from the Sun, Uranus is the coldest. There are about 2.88 billion kilometers from the Sun to Uranus, and 4.5 billion to Neptune. Why is Uranus colder?

Because unlike other large planets, it receives more than it emits heat. Other large planets have a very warm core and emit infrared rays. Something makes the core of Uranus colder than the point at which it would radiate heat. The temperature of Uranus clouds drops to 49 K, which is minus 224 degrees C.

The planets rotate around their axis which is towards the Sun under a certain inclination. On most planets, this inclination is small, for example, the inclination of the Earth is 23.5 degrees in relation to the plane of the Sun.

But the inclination of Uranus is extreme – 99 degrees. This makes it look as if Uranus is lying in its orbit around the Sun.

The day on Uranus lasts about 17 hours, but the inclination of Uranus is such that one pole is directed towards the Sun. This means that one day on Uranus, at say the North Pole, lasts half of Uranus’ year, which is 84 Earth years. So, if you see the sun rising at the north pole of Uranus, you will have to wait 42 years for it to set.

The least dense planet in the solar system is Saturn (with this information, it is an unavoidable objection that Saturn would swim in a large enough tub of water). Uranus is in second place and its density is 1.27 grams per cubic centimeter.

Uranus, like Saturn, has rings, but they are much less conspicuous than Saturn’s. 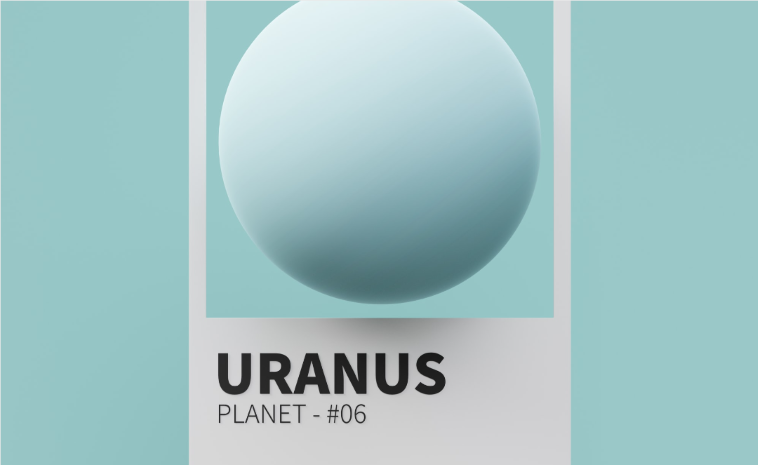 Uranus’ rings, unlike Saturn’s, are made of dark material. In addition, they are very narrow and extend only a few kilometers. Astronomers believe that these rings are very young.

The color of Uranus’ atmosphere in visible light is blue and – astronomers say – it is very boring. It’s not even like the exciting coloring of Jupiter or Saturn. But if you look closely at Uranus in other wavelengths, you will see that it also has some patterns and stripes and bright areas in its atmosphere.

So far, astronomers have managed to find out that the current number is 27. But Uranus’ satellites are quite small in mass and all together barely have a mass like half a Triton (Neptune’s largest moon). The largest Uranus satellite is Titania and the diameter is half the diameter of our Moon.

Most of the planets are visible to the naked eye and we have known them since ancient times. Uranus is the first planet discovered after the discovery of the telescope. The first record of Uranus dates from 1690 and was made by John Flamsted, who thought it was a star in the constellation Taurus. But it was not until William Herschel in 1781. who realized that it was, in fact, a planet.

The magnitude of Uranus is 5.3 and it can be seen with the naked eye even though it is at the very limit of visibility. Of course, ideal observational conditions are needed to capture Uranus without the aid of optics.

Only one spacecraft in flight history visited Uranus. In fact, it just rushed past Uranus. It was NASA Voyager 2 in January 1986, at a distance of 81,000 km. The spacecraft took thousands of photographs of the surface of Uranus and its moons.