Voyager 2 has been flying without any contact with the Earth for almost a year now. This probe is much closer to the Sun than its sister. Although it’s much slower, it obtains more data because it has more functional instruments.

44 years in the making

On October 29, 2020, NASA re-established contact with its Voyager 2 spacecraft, which launched from Earth in the summer of 1977. The spacecraft is currently located nearly 20 billion km from Earth.

It is located outside the heliopause, or border area, where the influence of the Sun ceases and the interstellar medium begins. The 44-year-old space probe was left to fly on its own for months while people repaired the radio antenna that controls it.

In the 500 months since NASA sent Voyager 2 on its way, the probe flew beyond the boundaries of human research, visiting the systems of Uranus and Neptune and, finally, the interstellar space.

Last March, the U.S. agency was forced to turn off its only means of communication across the sky to its robotic ambassador. On November 30th this year the earth’s silence ended, because NASA turned on that communication channel again, restoring humanity’s ability to greet its distant researcher.

Due to the direction in which it flies from the solar system, Voyager 2 can receive orders from Earth only via one antenna on the entire planet. It is called DSS 43 and is located in Canberra, Australia. It is part of the Deep Space Network, or DSN, along with stations in California and Spain.

Round-trip communication with Voyager 2 takes about 36 hours or 17 hours and 55 minutes one way.

DSS-43 is a 70-meter antenna that has been operating since 1973. It has long been due for upgrades, especially considering the new robotic missions that went to Mars earlier this year. So last year that antenna was turned off and dismantled, even though the shutdown posed a significant risk to the probe.

Like everything in 2020, what was supposed to be a normal antenna upgrade was anything but. Typically, mission managers at NASA’s Jet Propulsion Laboratory in California would send about 30 experts to oversee the remodeling of the plates. But restrictions imposed during the pandemic reduced the team to four. 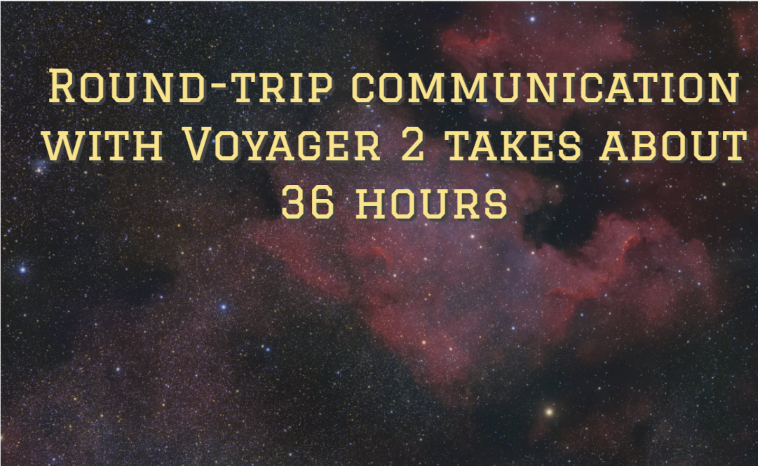 As Voyager 2 continues its journey covering over 1,320,000 km per day, the team of four colleagues at NASA are preparing to turn off the heater with one of its scientific sensors. This will ensure that the probe’s limited power supply can keep its other vital systems warm enough to function. The main focus is on the DSS-43 communication antenna.

The challenge is no longer in great discoveries or new technologies, but in keeping the probe working and sending scientific data for a longer time.

An interesting fact about the Voyager is that its transmitter is really small and of low power – only 22 W. This is roughly the power of a light bulb in a fridge. However, this is how radio telescopes function, because everything else they pick up in space is far weaker than that, as crazy as it may seem at first.

Both Voyager 1 and Voyager 2 hold records for the most remote aircraft and for the longest operational missions.

Although Voyager 2 has had a few hiccups in recent years, it is still working decently, revealing the boundaries that separate our solar system from the rest of the Milky Way galaxy. The NASA team estimates that both probes can operate for another eight years.