It is common nowadays to know your zodiac sign and, more often than not, we tend to associate certain human characteristics with specific signs. But did you know that the way others perceive us does not depend on our main zodiac sign? Let us delve further into this riddle in today’s blog.

An ascendant (rising sign) is a zodiac sign that appeared on the eastern horizon at a certain time and place of event. If a person is born at dawn, at the moment when the sun was just on the horizon, its ascendant will be the same as the sign. Astrology tells us that the science happening in the skies above us plays a mayor role in determining life below. In a poetical sense, a new day begins when the Sun makes its appearance on the eastern horizon. Just like that, astrologers claim that the rising sign is closely connected to the birth of one’s consciousness.

The rising sign in the horoscope can have a greater impact than the sign itself, and that depends on the position of the planets at a given moment. For example:

The general characteristics of somebody’s personality lie in their main zodiac sign. For specifics that set us apart, we look for answers in the symbolism of the rising sign. It gives us those qualities that describe somebody’s personality, and it affects one’s appearance. The rising sign reflects what kind of impression we leave when interacting with other people as well.

How To Calculate the Ascendant

While the Sun is very important in the horoscope, neither the Moon nor the rising sign should be treated as much less important – all three elements are important, in different ways. The ascendant is especially treated lightly, partly due to the lack of information about the time of birth, so it is difficult to determine.

Today there are various applications that make it easier to perform complicated mathematical tasks. However, it is not only important to calculate, but one should know how to interpret certain signs and their symbolism, that is, one should know a lot about astrology itself. To be able to calculate your rising sign in the horoscope, you need to know how to calculate the arrangement of the stars and planets at the time of your birth.
Here is the universal form: 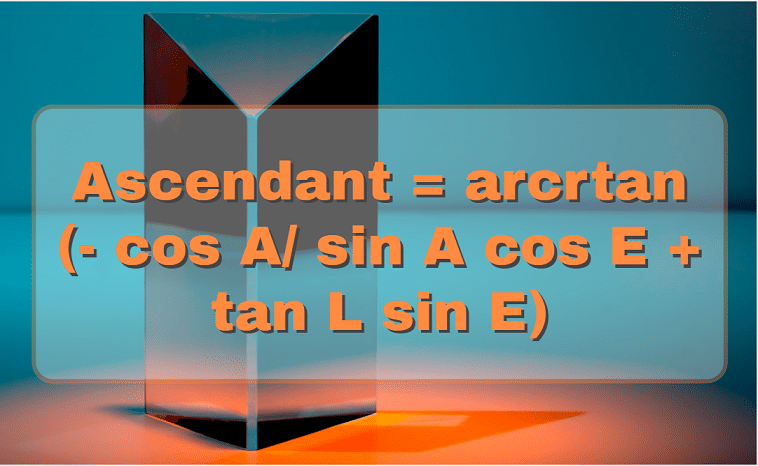 It is important to know where the person was born, in what place and at what latitude and longitude.

Things To Keep In Mind

Because the ascendant is specific to a particular time and place, astrologers believe that it signifies the environment and influences that a person receives during upbringing, as well as the circumstances of their childhood. For this reason, astrologers think that the ascendant also shows how a person presents themselves to the world and how others see them. In some circumstances, it can also function as a shield or mask that preserves a person’s true nature – in other words, a “defense mechanism” that each person uses in unfamiliar or awkward situations. Astrologers believe that the ascendant also has a strong influence on a person’s physical appearance and overall health and should therefore be known and calculated.

Its influence also varies through our lifetime, so there are claims that after 30 years, our sub-sign in the horoscope plays a bigger role in our life than our main sign. This is because we become more mature and more aware of ourselves as we age.