On any given evening, the night sky offers a host of beautiful and fascinating objects for us to study and admire. But one constellation has been grabbing our attention for thousands of years. In this blog, we’ll answer the question: what is the Orion constellation?

After the moon and perhaps some of our solar system’s more prominent planets, Orion is one of the first things that many people spot in the night sky. Stargazers from across the globe have emotional attachments to the constellation; such is its beauty and importance. But beyond its aesthetics, Orion is a fascinating part of astronomy and human history. So, what exactly is the Orion constellation?

In a recent article, we examined what a constellation is. But, for a quick recap, a constellation is a collection of stars that, from Earth, appear to resemble a familiar shape, such as an animal or mythical character. Orion is one of the oldest and most easily recognisable of these constellations. With a prime position on the celestial equator, it can be viewed from most places around the world, frequently appearing in the winter sky in the northern hemisphere and the summer sky in the southern hemisphere. With its bright stars and prominent features, it has been a fixture of art, religion and philosophy throughout human history. The earliest known depiction of Orion, found in Germany in 1979, is believed to be as much as 38,000 years old!

Why Is It Called Orion?

The constellation has gone through a few names over the years. The Babylonians referred to it as ‘The Heavenly Shepherd’, while the ancient Egyptians identified the constellation with the god Sahu. But, as with many astronomical features, the name that stuck came from ancient Greece. In Greek mythology, Orion was a giant hunter and the son of Poseidon, the sea god. He appears in some of the oldest-surviving Greek works, including Homer’s Odyssey and Iliad. Homer’s works are also where Orion is first mentioned as being a constellation. 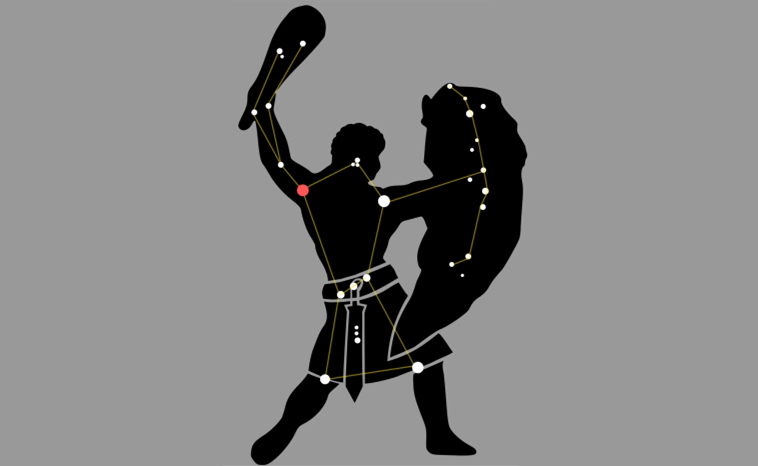 Which Stars Are Part of the Constellation?

The most notable feature of Orion is undoubtedly Orion’s Belt, a collection of stars that appear close together in the constellation’s centre. The belt comprises three stars collectively called Al-nizam, Arabic for ‘string of pearls’. These stars also have Arabic names: Alnitak, Alnilam and Mintaka. Hanging beneath the belt is Orion’s Sword, which, along with three stars, features M42 – also known as Orion’s Nebula. Orion’s two brightest stars are the red supergiant Betelgeuse and the blue supergiant Rigel, usually the seventh brightest star in the night sky. 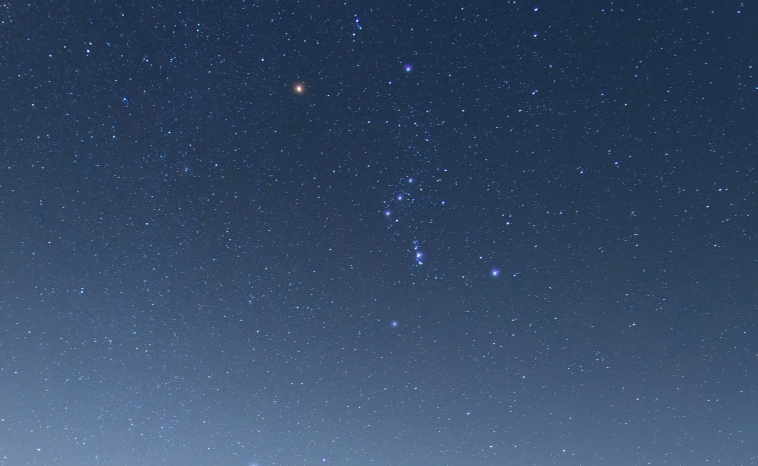 How Far Away Is Orion?

As with other constellations, the stars that form Orion aren’t particularly close to each other or related in any way. By coincidence, they just happen to form the constellation’s familiar shape from our vantage point here on Earth. The nearest of Orion’s stars, Bellatrix, is 243 light years away, while the furthest star from Earth is Alnilam, clocking up a much greater distance of 1,360 light years. The Orion Nebula, one of the closest nebulae to Earth, is a similar distance away.

How to Find the Orion Constellation

With its celestial equator position, bright stars and distinguishable features, Orion is one of the easiest constellations to locate. You won’t need special viewing equipment to enjoy Orion on a clear night away from light pollution. However, with a good pair of binoculars, you’ll be able to further examine the stars and make out some of the details of the Orion Nebula. Using the OSR Star Finder App, you can spend less time searching for the constellation and more time appreciating its beauty.