Our planets: facts about the planet Neptune

Discover the blue planet Neptune! Did you know Neptune is the coldest planet in our Solar System? In addition, Neptune has extreme weather patterns with unprecedented gusts of wind. Read on to learn everything about planet Neptune!

The planet Neptune is named after the Roman god of the sea. The god Neptune is the god of freshwater and the sea. The planet gets its name from the fact that it consists almost entirely of hydrogen. In Western astrology, Neptune rules the water sign of Pisces and represents inspiration and idealism.

Neptune has a bright blue color. The methane in Neptune’s atmosphere absorbs the red light waves in the sunlight. Neptune’s atmosphere consists mainly of hydrogen and helium. The planet has an extreme climate – the winds on Neptune are the most powerful in the entire Solar System. The average wind speed is approximately 900 kilometers per hour and can go up to 2100 kilometers per hour!

Neptune in our Milky Way

Neptune is the eighth and farthest planet from the Sun. This planet was discovered in 1846 by the German astronomer Johann Galle. A few years earlier, Urbain Le Verrier and John Couch Adams had already calculated that this blue planet must exist. They saw the orbit of Uranus was influenced by a then unknown planet. Neptune is the first planet whose existence was determined before being observed. Its largest moon, Triton, was discovered shortly after the discovery of Neptune. Though none of the planet’s remaining 13 known moons were located telescopically until the 20th century. 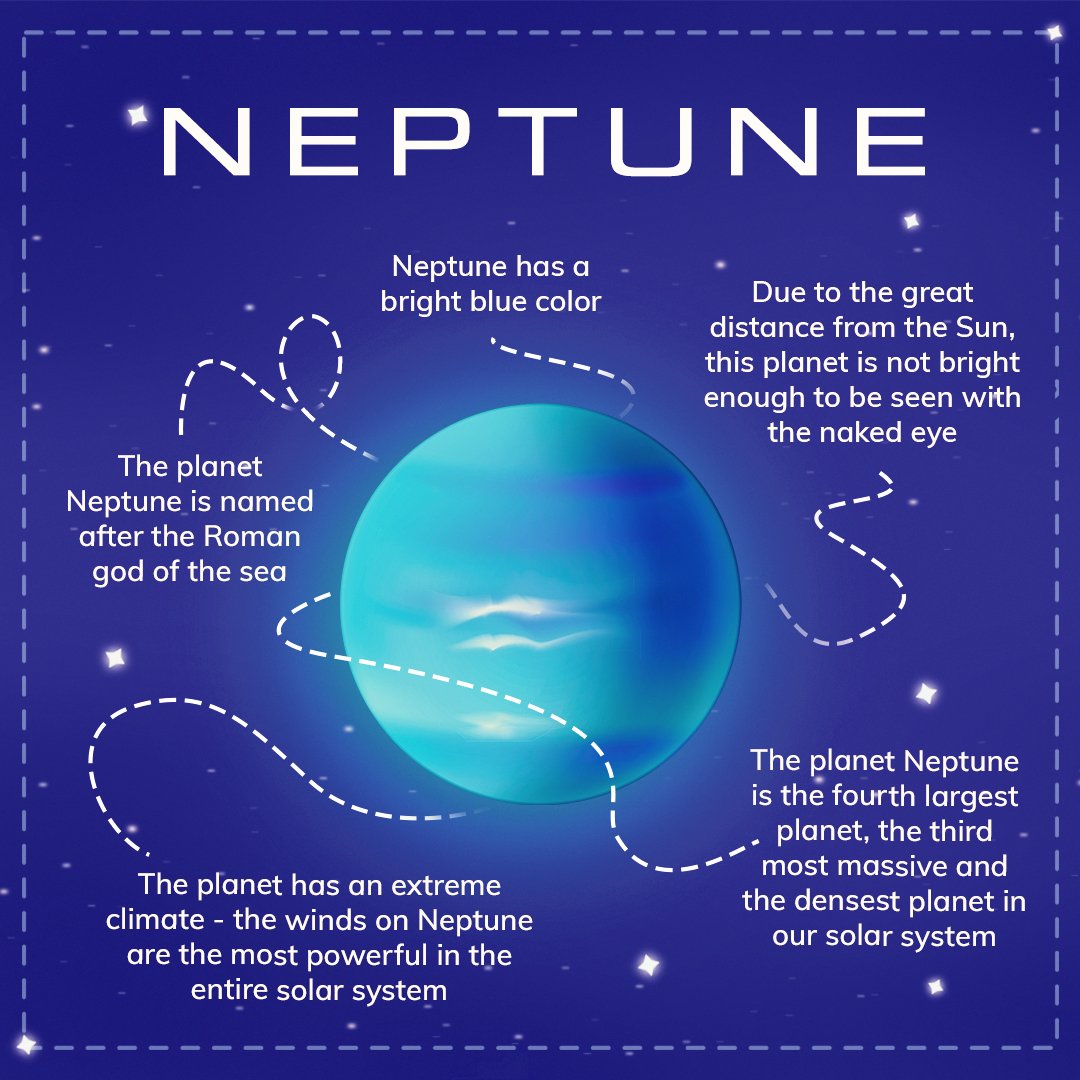 Neptune compared to other astronomical objects

This blue planet is the fourth largest planet, the third most massive and the densest planet in our Solar System. This blue planet has a mass 17 times larger than Earth. Neptune is very similar to the planet Uranus. Neptune and Uranus are also called brothers. Uranus is about the same size as Neptune and both planets appear blue in color. In addition, both planets have approximately the same atmosphere. Neptune has 14 moons. The largest moon is Triton. The size and composition of the moon Triton resembles the dwarf planet Pluto.

Due to the great distance from the Sun, this planet is not bright enough to be seen with the naked eye. With binoculars, Neptune can be found in the night sky. If you use a telescope, this blue planet can be seen fairly well!

Neptune is full of surprises!

We’ve introduced you to our planet Neptune, the eighth planet of our Solar System measured from the Sun. In this blog we have told you what the blue planet Neptune looks like. In addition, we explained the extreme weather conditions on Neptune. Go on a journey through our Solar System and view our stars and planets with the OSR Star Finder app. View Neptune at any time!