The Moon has a huge influence on the Earth and her habitants. In this blog we will tell you about the influence and the energy of the Moon. Moreover, we will be sharing ten interesting facts about this magical celestial body.

The energy of the Moon

In ancient times the position of the Moon was the only time indication for humans. There was no other way than relying on the Moon. Traditionally, the Moon has had a symbolic meaning. The moon is considered as a female celestial body. Did you know that the Moon’s cycle runs parallel to the menstrual cycle of a woman? In astrology, the energy of the Moon is associated with the female yin energy, which causes the women to experience the energy of the Moon more intensely than men.

Influences of the Moon on the female body

Women experience the lunar energy more intensely than men, because of the eleven moon centers. These moon centers are eleven spots in the female body that notice lunar energy and respond to it. This response is not only noticeable on a physical level, but also on a mental, energetic and spiritual level. The lunar energy moves in a set order along different points in the female body, like the neck, cheeks and lower back. This happens simultaneously to the phases of the Moon in a 28-day-cycle. Would you like to find out where your Moon center is right now? Keep a diary and take a deep look at yourself. It will help you understand your mood and behavior better.

🌙 Would you like to move along with the lunar energy? Try to live with the rhythm of the Moon. Follow the magical rhythm of the moon for more luck and balance in your life.

Rituals to work with lunar energy

Nowadays, we barely look up at the sky to see what the Moon looks like, however that does not mean that her influence is lost. To feel more connected to nature, there are several rituals you could adopt in your daily life. During New Moon, you could do yoga, meditate or reflect on the past and set new goals for the future. During Full Moon, you could focus on releasing. You could do this by taking an extra long shower, do a deep cleansing ritual or write down what you are grateful for. Moreover, using gemstones or incense could help you connect to nature and its powers. 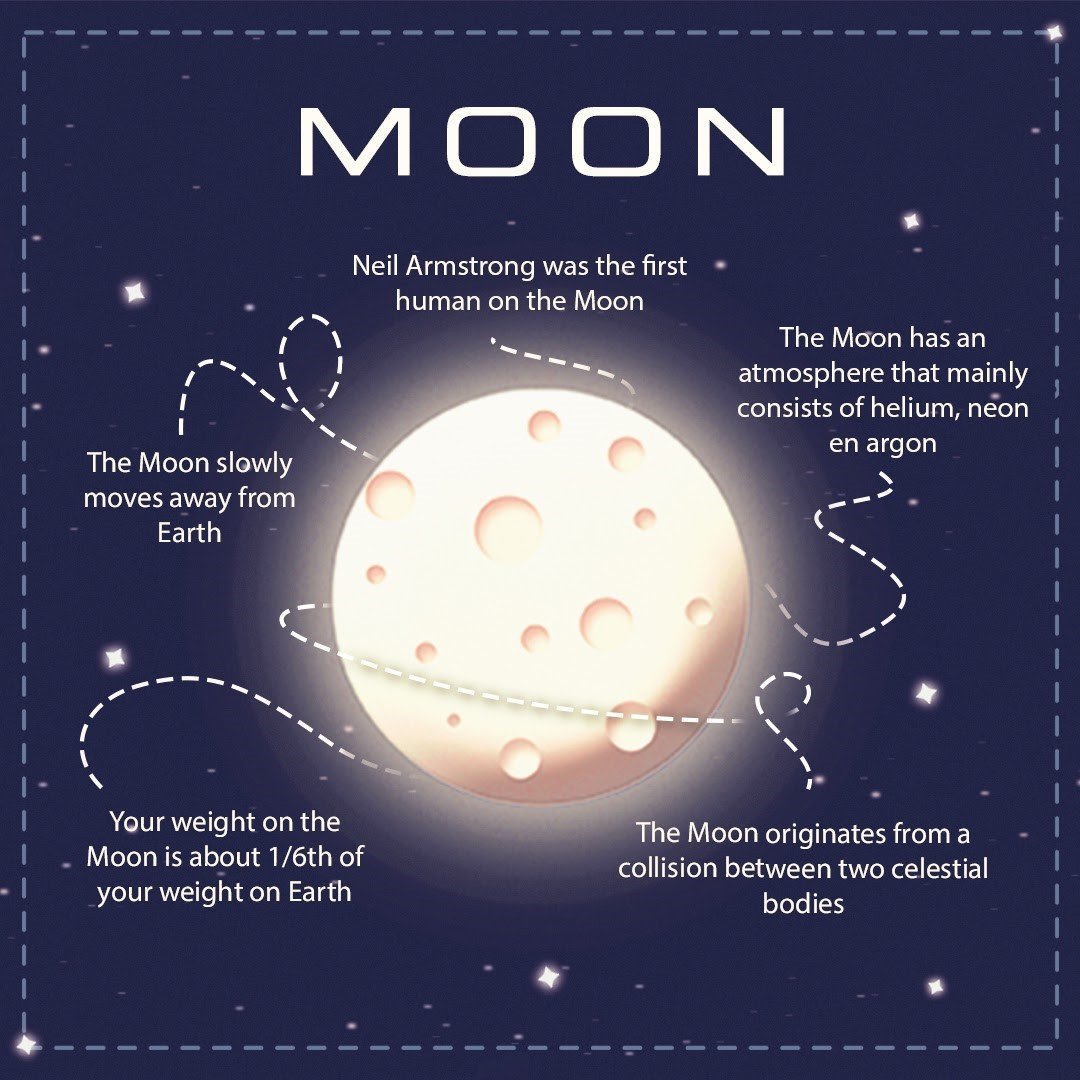 Facts about the Moon

You now know everything about the energy of the Moon! But what is the Moon’s origin? And what is the atmosphere on the Moon? Humanity has been studying the Moon for ages, and this is what we know:

1. The Moon originates from a collision between our Earth and a foreign object the size of Mars. After a while, the debris of this collision clumped together and formed the Moon as we know it. This can also be called ‘The Big Whack’.
2. There is water on the Moon. Scientists are not entirely sure where the water originates. It is possible that the water is transferred there through solar wind or comets.
3. The Moon is always facing the earth with the same side. This has to do with the attractive force of planet Earth.
4. The Moon slowly moves away from the Earth. The movement goes slowly, moving approximately 1.6 inches each year.
5. On the Moon, you weigh about one sixth of your weight on Earth. The Moon has a much lower gravitational pull than Earth.
6. The moon has an atmosphere that mostly consists of helium, neon and argon.
7. During sunset and sunrise there can be ‘dancing’ lunar dust on the Moon.
8. Neil Armstrong was the first human to walk on the Moon. Eugene Cernan was the last human to walk on the moon in 1972 during the Apollo 17-mission.
9. On a regular day it can be 396 degrees Kelvin on the Moon, while at night temperatures can go as low as 50 degrees Kelvin.
10. The Moon has mountains. The biggest one, Mons Huygens, is 15102 feet high.

Now you know everything about our Moon in the night sky. Did you know that during daylight you can find the Moon using our OSR Star Finder app?

Discover the Moon and her stars!