The astronomical events of January 2021

Let us guide you through the astronomical events of January 2021. To start the year off, we have handpicked four mesmerizing astronomical events for this month! While choosing these astronomical events we have done our best to pick some fascinating that are also visible with the naked eye. However, if you happen to have binoculars or a telescope at your disposal, feel free to use them. Be sure to write down the dates of the events in your calendar so you won’t miss them! 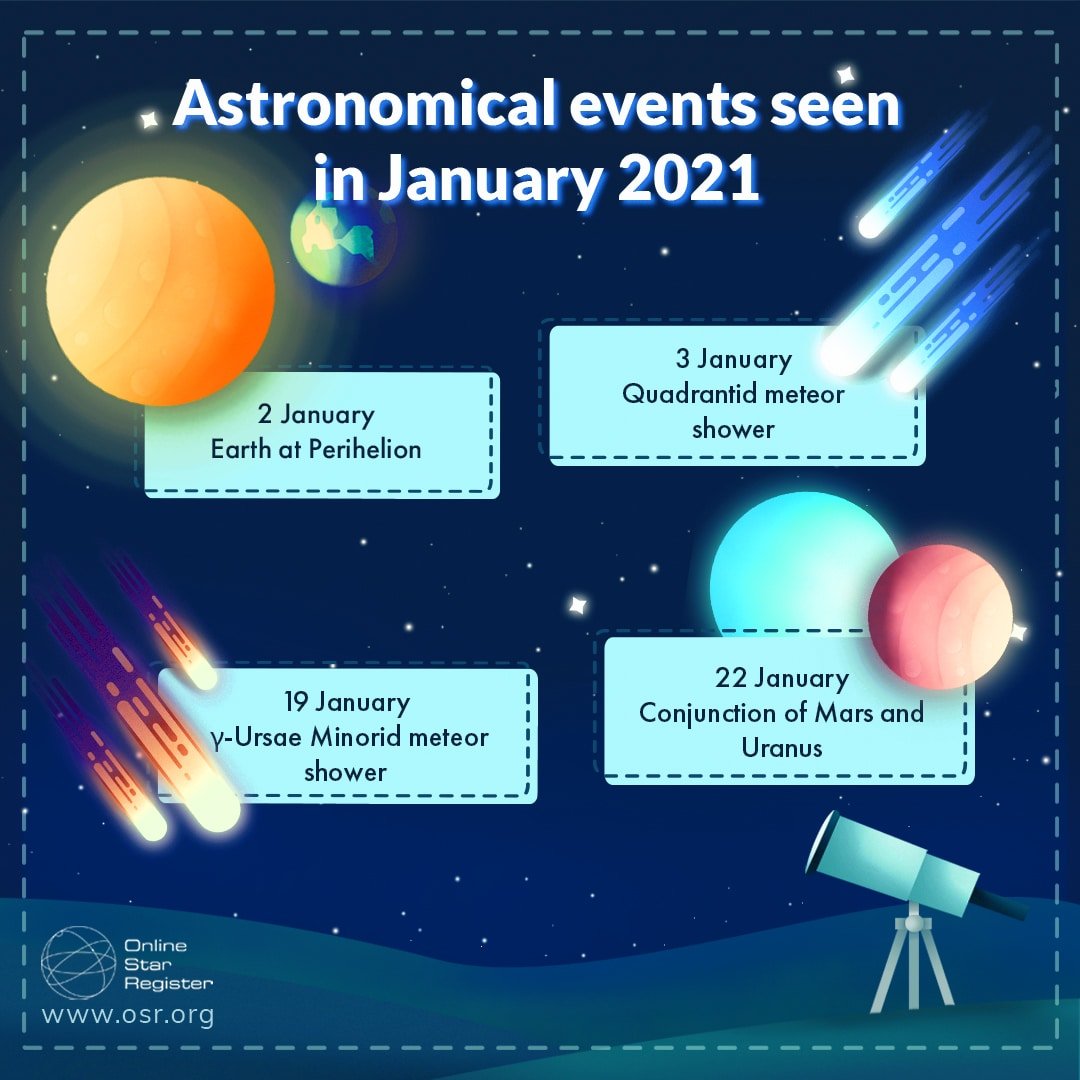 Each year one orbit-cycle is completed which causes the Earth to make its closest approach to the Sun. This takes place on approximately the same day each year. In the year of 2021, this is on Saturday the 2nd of January.

The Quadrantids are a January meteor shower. The name of the meteor shower resonates from a constellation named in 1795 by the French astronomer Jérôme Lalande. This constellation was named Quadrans Muralis, but is now part of the constellation Boötes. Depicted as a herdsman with a club, Boötes follows Ursa Major, the bear.

You can view the Quadrantid meteor shower in the constellation Boötes. From the northern hemisphere at around 50 degrees the radiant point of the meteor shower is above the horizon. This causes the number of visible meteors to increase. Additionally, the radiant point is circumpolar which means that it is always above the horizon and that the shower is active throughout the whole night. When you view the constellation from the southern hemisphere, the meteor shower will be visible later in the night (or earlier in the morning) and rises from the eastern horizon.

On Friday the 22nd of January the conjunction of Mars and Uranus is visible in the night sky. Mars is the fourth planet from the Sun, whereas Uranus is the seventh planet from the Sun. A conjunction means that two or more celestial bodies pass each other. As mentioned in the astronomical events of December 2020, a conjunction is a phenomenon caused by the observer’s perspective. Therefore, while the two planets seem to be in close approach of each other from the perspective of Earth, they are in fact still quite far away from each other. During the conjunction of Mars and Uranus, Mars and Uranus will share the same right ascension, with Mars passing 1°43′ to the north of Uranus.

We hope to have given you enough reasons to go out exploring the night sky with the astronomical events of January 2021! There’s a lot to explore in January such as the Earth at Perihelion, the Quadrantid meteor shower, the y-Ursae Minorid meteor shower and of course the conjunction of Mars and Uranus.