Thanks to observations from NASA’s Spitzer Space Telescope, the first temperature map has been taken of a Super-Earth planet called, 55 Cancri e.

This rocky planet is nearly two times as big as Earth and has shown to have extreme temperature swings from one side of the planet to the other. What is causing this temperature-conflict? It could quite possibly be the presence of lava flows.

A statement made by Brice Olivier Demory of the University of Cambridge, England says;

“Our view of this planet keeps evolving. The latest findings tell us the planet has hot nights and significantly hotter days. This indicates the planet inefficiently transports heat around the planet. We propose this could be explained by an atmosphere that would exist only on the day side of the planet, or by lava flows at the planet surface.” 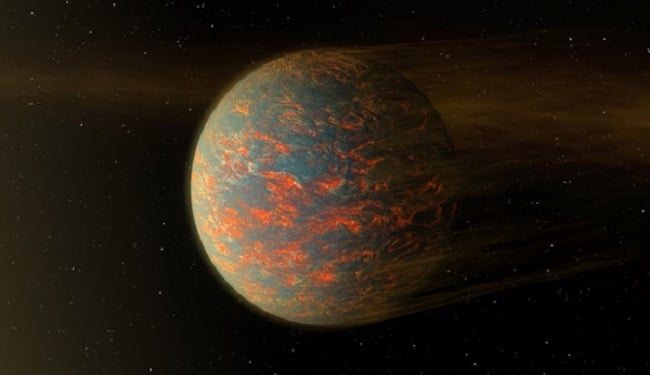 This illustration shows one possible scenario for the hot rocky exoplanet called 55 Cancri e, which is nearly two times as wide as Earth.
NASA/JPL-Caltech

This Super-Earth is only 40 light-years away and has a close orbit to its star (orbiting it every 18 hours). Because of the planet’s close proximity to this star it is tidally locked by gravity just as the Moon is to Earth. For this reason one side of 55 Cancri e, is always cooking under the intense heat (the day side) while the night side is much cooler because it remains in the dark.

“Spitzer observed the phases of 55 Cancri e, similar to the phases of the Moon as seen from Earth. We were able to observe the first, last quarters, new and full phases of this small exoplanet.”

Spitzer was aimed at this toasty planet for 80 hours, using its infrared vision. It watched 55 Cancri e orbit all the way around its star several times, collecting the fascinating data which allowed scientists to map its temperature changes. The results? To their surprise, they found a dramatic temperature difference of 2,340° F (1,280° C) from one side of the planet to the other. The hottest side is nearly 4,400° F (2,400° C), and the coolest is 2,060° F (1,130° C).

“these observations helped us build a map of the planet. This map informs us which regions are hot on the planet.”

Although researchers once thought the thick atmosphere and winds may have been moving the heat around the planet, this huge temperature variation could only mean the heat is not being distributed around the planet very well, but instead, the findings suggest a planet devoid of a massive atmosphere and possibly hint at lava. The presence of this volcanic substance would become hardened on the night side and therefore unable to transport heat to the atmosphere.

Michael Gillon from the University of Liège, Belgium had this to say;

“The day side could possibly have rivers of lava and big pools of extremely hot magma, but we think the night side would have solidified lava flows like those found in Hawaii.”

Another surprise was found when the data from Spitzer showed the hottest spot on the planet had shifted over from where it was expected to be, which was directly under the blazing star. Scientists theorize this shift may either indicate some degree of heat re-circulation (confined to the day side) or could even point to an extremely high surface temperature indicated by lava flows.