Make Valentine’s Day extra special by sharing a beautiful love story. The sky is filled with amazing love stories that still take place among the stars. Look up at the sky and see true love among the constellations. Read more and impress a loved one with your knowledge on celestial romances.

The story of Perseus and Andromeda

One of the most famous love stories in Greek Mythology is the story of Perseus and Andromeda. There are several constellations involved such as Cassiopeia, Cepheus, Pegasus and Cetus.

Princess Andromeda was a very beautiful woman. Her mother, Queen Cassiopeia, claimed her daughter was more beautiful than Poseidon’s daughters. As punishment for her vanity, Poseidon sent the sea monster Cetus. Andromeda’s father, king Cepheus, trusted the sea monster to disappear if they were to sacrifice her. Just before she was devoured by the sea monster, Perseus came by on his flying horse Pegasus. He was on his way home after one of his great adventures. Perseus fell in love with the beautiful Andromeda and struck a deal with her parents. Perseus would save their daughter by killing the sea monster and in return he would be allowed to marry her. Andromeda however, was already promised to marry another man. A fight arose between the two which Perseus eventually won. Perseus and Andromeda lived happily ever after.

The characters in this story have all been placed in the sky by the gods, so their story would never be lost. It is fun to see that Cassiopeia is placed upside down, as a result of her vanity. Perseus and Andromeda are still positioned close together in the sky, where they rotate around the North Star.

Another one of the famous Greek love stories written in the stars, is about the Seven Sisters. The Pleiades or the Seven Sisters is an open cluster of stars in the Taurus constellation. These stars are easy to see with the naked eye thanks to their brightness.

The Pleiades are represented in Greek mythology as the seven daughters of the Titan Atlas. Atlas was charged with carrying the heavens on his shoulders, leaving him far away from his daughters. The great hunter (and constellation) Orion would have fallen in love with the seven sisters and tried to court them. To reassure their father, Zeus turned the daughters into stars so that they could be closer to their father. Even now, it seems that Orion is chasing the Pleiades through the heavens.

The Pleiades represent seven sisters, while most people see only six stars with the naked eye. In Greek mythology this is explained by the fact that the star Merope is ashamed of being the only one of her sisters who married a mortal man. Her husband is not named as a star in heaven, in contrast to the immortal spouses of the other sisters. 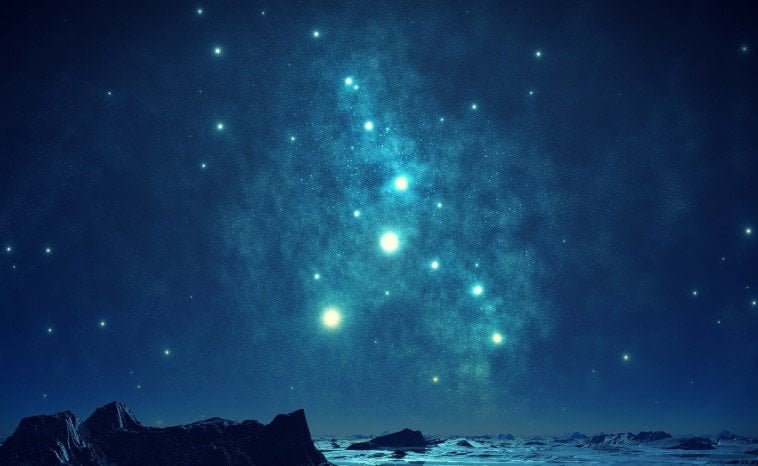 Coma Berenice is one of the modern constellations, visible from both hemispheres. The constellation is named after Queen Berenice II of Egypt.

According to the story, Berenice’s husband fought in a dangerous war against her sisters’ murderers. Berenice was very concerned about her husband and whether he would return. She promised Aphrodite, the goddess of love, that she would cut her long hair if the goddess brought her husband home safely. When her husband returned from the fight unharmed, Berenice kept her promise. She cut her hair and placed it in the temple of Aphrodite. The hair was gone the next day. The myth of Coma Berenice explains Aphrodite had been so happy with the sacrifice, that the goddess had placed the hair in the starry sky. Thus, this constellation is represented as the hair of Berenice.

This story originates from a Chinese legend and covers the 3 constellations Aquila, Cygnus and Lyra. It is also known as The Legend of the Magpie Bridge.

The star Altair in the Aquila constellation symbolizes a poor shepherd boy named Niu Lang. The star Vega from the constellation Lyra symbolizes a weaver girl named Zhi Nu. The two fell hopelessly in love with each other. Both their parents forbade the relationship and separated them from each other. There are various stories about the reason their love was forbidden. In one of those stories the shepherd boy was born to a mortal family and the weaver girl created by the gods.

In another story, their parents are unhappy about the lovers neglecting their chores. In all stories the lovers are separated by a river. In the sky, Altair and Vega are separated by a galaxy. Once a year the two stars move closer together. The Chinese legend says that the boy and the girl can only meet by crossing a bridge that is formed by magpies who had come to their aid. The constellation Cygnus serves as the magpie bridge over which the shepherd boy and weaver girl can meet. This legend is still celebrated in China on the seventh day of the seventh month.

Are you touched by the stories, and want to shine like a star in the sky together with your loved one?

Name a star for your Valentine!