They have been the topic of many disaster movies, but could giant comets really pose a threat to Earth? Scientists say, yes…someday. These “fictional” space rocks could very well crash into our planet, leaving a massive amount of damage in their wake, but when this may take place is still undetermined.

Apparently, hundreds of giant comets have been making their way (and continue to do so) into our solar system over the last couple of decades, meaning the risk of one landing here on Earth has increased.

These giant space rocks called, Centaurs, used to be spinning around the outer reaches of our solar system, but because they are now encountering the gravitational forces of the larger planets (Jupiter, Saturn, Uranus and Neptune) they are occasionally being deflected into the path of Earth.

How big are these Centaurs?

Centaurs are typically 30–60 miles (50–100 kilometers) across, but can run even larger — containing more mass than the entire population of our planet! Calculations done by scientists show that Centaurs will enter Earths orbit about once every 40,000–100,000 years.

Where do we sit on this timeline?

With all the data collected over the years and extensive research done into the past all indicate a Centaur may have collided with our planet around 30,000 years-ago. In addition, researchers are also led to believe one of these cruising space rocks may have wiped out the dinosaurs some 65 million years-ago.

“In the last three decades, we have invested a lot of effort in tracking and analyzing the risk of a collision between Earth and an asteroid. Our work suggests we need to look beyond our immediate neighborhood too and look out beyond the orbit of Jupiter to find Centaurs. If we are right, then these distant comets could be a serious hazard, and it’s time to understand them better.”

While most space rocks burn up in our atmosphere, leaving behind fragments that can range from dust-size to mighty chunks, a collision by a Centaur would have truly devastating affects. 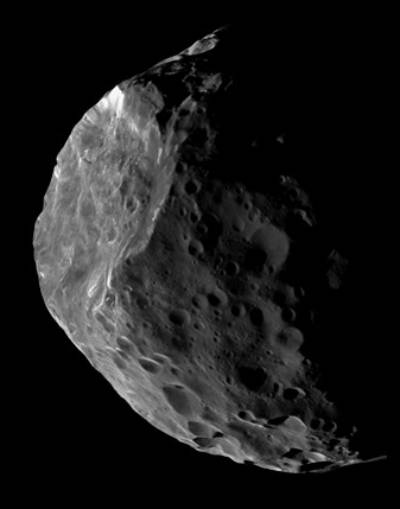 Although the above picture is of Phoebe (Saturn’s 124 mile diameter moon (200 kilometers)) scientists feel it is likely to be a Centaur that was once captured by the planet’s gravitational pull. Until we can send spacecraft to specifically image these Centaurs, Phoebe is the best guess researchers have into what these giant space rocks look like — this pic was obtained by the Cassini space probe orbiting Saturn.

“NASA’s New Horizons spacecraft has been targeted to conduct an approach to a 28 mile-wide (45-kilometer) trans-Neptunian object at the end of 2018.”

Is Earth likely to experience a giant comet slamming into its surface? Scientists are watching and learning all they can about this potential hazard. The possibilities may be slim, but we must be ever vigilant in our pursuit of knowledge and what lies beyond the sight of our telescopes.