Always wanted to know more about the planet Uranus? Search no further! In this blog we tell you all you need to know about Uranus. Read about what Uranus looks like, where the planet is located in our galaxy and when you can view the planet from Earth!

Uranus is the seventh planet from the Sun. Surprisingly, Uranus is named after a Greek god instead of a Roman god. Uranus has been observed by many astronomers and funnily enough was thought to be a star at first! However, in 1781 British astronomer William Herschel discovered Uranus with his telescope and after studying it for some time found out it was a planet. Uranus is the first planet to be discovered in the modern age by using a telescope.

The inside of Uranus is mainly composed of ice and rock. Uranus is blue-green in color, as a result of the methane in its mostly hydrogen-helium atmosphere. The planet is often called an ice giant, since at least 80% of its mass is a fluid mix of water, methane and ammonia ice.

Unlike the other planets of our solar system, Uranus is tilted so far that it essentially orbits the Sun on its side. This unusual orientation might be due to a collision with a planet-size body, or several small bodies, soon after it was formed. A 2018 study suggested the colliding world could have been twice the size of Earth.

The unusual tilt of the planet gives rise to extreme seasons that last for about 20 years. This means that for nearly a quarter of the Uranian year, which is equal to 84 Earth-years, the Sun shines directly over each pole. When this happens, the other half of the planet experiences a long dark and frosty winter.

Uranus has the coldest atmosphere out of any of the planets in the solar system, even though it is not the most distant from the Sun. That’s because Uranus has little to no internal heat to supplement the lack of heat from the Sun. Uranus’ cloud tops measure minus 224 Celcius, while the core has temperatures of more than 4700 Celsius.

Brrrrr! Uranus has the coldest atmosphere out of any of the planets in the solar system. 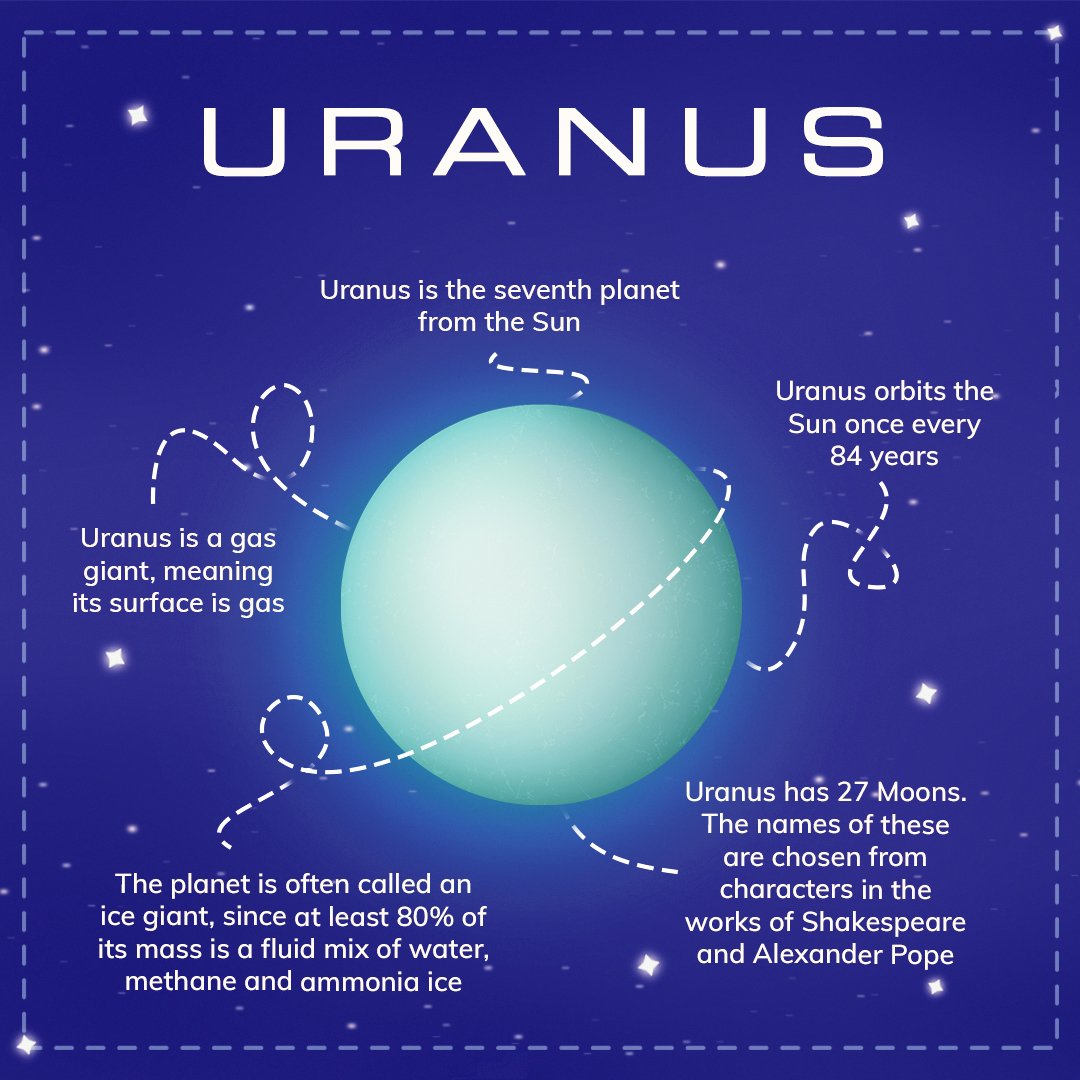 Planet Uranus and our galaxy

Uranus is similar in composition to Neptune. Both these planets have bulk chemical compositions which differ from that of the larger gas giants Jupiter and Saturn. For this reason, scientists often classify Uranus and Neptune as ice giants to distinguish them from the other gas giants.

The location of the planet Uranus in comparison to other astronomical objects
Uranus orbits the Sun once every 84 years, taking an average of seven years to pass through each of the dozen constellations of the Zodiac. In 2033, the planet will have made its third complete orbit around the Sun since being discovered in 1781.

Uranus has 27 “natural satellites”, also known as Moons. The names of these are chosen from characters in the works of Shakespeare and Alexander Pope. The five main Moons are Miranda, Ariel, Umbriel, Titania, and Oberon.

Life on the planet Uranus?
Uranus is very different from Earth. Uranus is a gas giant, meaning its surface is gas. Therefore, it would be impossible to stand on the planet. Being so much further from the Sun, Uranus is much, much colder than Earth. Also, Uranus’ odd rotation in relation to the Sun gives it very different seasons. The Sun would shine on parts of Uranus for as long as 42 years and then the next 42 years this spot would be embedded in darkness.

Additionally, another problem is that life requires sunlight to provide it with energy. There’s no process inside Uranus, like volcanism on Earth, that would give life inside the planet a form of energy. Thus, life on Uranus would have to be vastly different from anything we have here on Earth to be able to survive.

Uranus has a range of brightness which is near the limit of naked eye visibility. Much of the variability is dependent upon whether the planet is being illuminated by the Sun and when it is being viewed from the Earth.

For most of the year and until mid-May, Uranus is so close to the Sun that it’s difficult or impossible to spot. However, you can see Uranus as early in the year as June if you’re willing to get up before dawn. Throughout the summer months, Uranus rises earlier and earlier, and by August it rises before midnight, causing it to be visible all night.

Additionally, Uranus is best visible when at opposition. During an opposition Uranus is visible to the naked eye in dark skies, and becomes an easy target even in urban conditions with binoculars. On November the 4th of 2021 Uranus will be at opposition, therefore creating the perfect moment to view the planet in our night sky.

Uranus is full of surprises!

The planet Uranus is filled with surprises and fun facts. Uranus is an ice giant and is the seventh planet from the Sun. The ice planet is mostly composed of ice and rocks and colors blue and green. Additionally, Uranus has an unusual tilt to its axis which gives rise to extreme seasons that last for many years. You can best view Uranus while it is at opposition. Need help locating Uranus in the sky?