The Pleiades is an open star cluster in the north-west of the constellation Taurus. This star cluster, also known as The Seven Sisters and Messier 45, has a special history. In this blog we’ll tell you everything about the origin of this magical star cluster and the associated Greek myths. Discover the Pleiades!

When you look at the starry sky on a dark night, you can see a small luminous cloud of hot blue stars. This star cluster is located 440 light-years from Earth. Together with the open star cluster of the Hyades, the Pleiades form the Golden Gate of the Ecliptic. Let’s discover the Pleiades and its history, plus its myths!

The history of the Pleiades

The Pleiades were known from ancient times. In 750, the Pleiades were mentioned by Greek poets. Until the 18th century, no research was carried out into this unusual star cluster. Astronomer John Michell calculated in 1767 that the probability of a chance alignment of so many bright stars was only 1 in 500,000, and so surmised that the Pleiades must be physically related. Later studies found that Michell was right. Those stars were all moving in the same direction across the sky, at the same rate, further demonstrating that they were related.

The Seven Sisters in the sky

The star cluster contains over 500 stars and has a size of about twelve light-years. 25% Of the total population in the cluster contains brown dwarfs. These are objects with less than approximately 8% of the Sun’s mass, which means they have too little mass to convert hydrogen into helium in their cores. There are also white dwarfs in the Pleiades. White dwarfs are stars that have reached the end of their life cycle. There are countless of white dwarfs in our starry sky, but none of them can be seen with the naked eye. Fortunately, you can admire dozens of bright stars from the Pleiades with an amateur telescope. 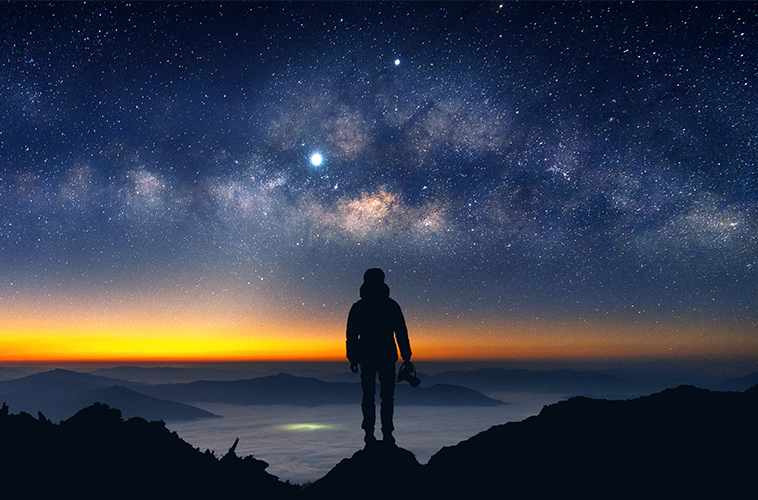 Myths about the Pleiades

The Seven Sisters cluster owes its name to the seven sisters from Greek mythology, who were placed in the sky by Zeus. The seven stars and sisters are named Maia, Electra, Alcyone, Taygete, Asterope, Celaeno and Merope, who stand like stars in the sky with their parents Atlas and Pleione. According to the Pleiades myth, one of the sisters, Merope, was ashamed of having a relationship with a mortal. Unlike Merope, the other sisters had relationships with a god. Therefore, Merope’s star would be less bright than the other stars.

You may recognize the Seven Sisters from Lucinda Riley’s book series ‘The Seven Sisters’. Lucinda was inspired by the names of Atlas and Pleione’s daughters. In addition, during the lifetime of her books, you can discover the original sisters in the characters.