Scientists have long held the opinion that the water from Mars left and went into space. Read on to learn about a new theory.

When researchers and scientists look at the surface of Mars, they can tell that water once flowed across its surface. They have evidence of rivers and dried-up lakes. Recently, scientists and geologists ran some models based on theories that much of the water did not leave the planet. Instead, they think that minerals on the planet absorbed much of the water. What happened to Mars’ water? They believe it remains hidden within the crust.

Mars’ Water Hiding Beneath the Surface?

It was once thought that Mars had enough water to cover the whole planet. In fact, they believe that the volume of water measured 330 to 4,920 feet (100-1,500 meters) deep. A consensus long held by scientists believe that all of the water left through the atmosphere. New NASA research believes that 30-99% of the water remains trapped in minerals.

“Atmospheric escape doesn’t fully explain the data that we have for how much water actually once existed on Mars,” said Eva Scheller, lead author of the new findings. ” Researchers suggested Mars lost 40% to 95% of its water during its Noachian period about 4.1 billion to 3.7 billion years ago. “Mars basically became the dry, arid planet we know today 3 billion years ago,” said Scheller.

The research team looked at data from multiple NASA Mars Exploration Program missions. In addition, they looked at meteorite lab work and the quantity of water on the Red Planet over time. They researched the water in all its forms; vapor, liquid, and ice. The researchers also studied the chemical composition of the planet’s current atmosphere and crust. Specifically, they worked out the ratios of deuterium to hydrogen (D/H).

Deuterium or more naturally called heavy hydrogen exists in small portions of water. The water particles that do not contain deuterium can easily float off into space. However, those that contain heavy hydrogen remain on Mars. The amount of water Mars still possesses in its atmosphere and ice would cover it with a global layer of water about 65 to 130 feet (20 to 40 m) thick. 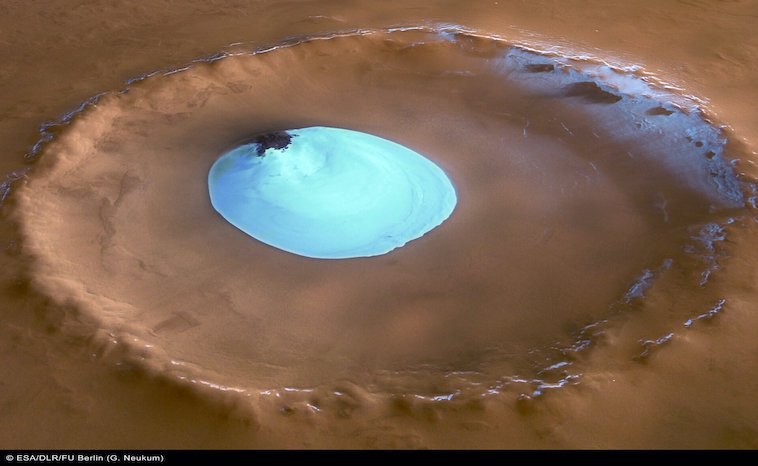 How much water exists in the crust?

NASA’s new Perseverance Rover will help answer these questions as part of its new mission. The rover’s mission will take place at Jezero Crater, a 28 mile wide (45-kilometer) crater located on the western edge of Isidis Planitia. Isidis Planitia is a giant impact basin just north of the Martian equator. Scientists chose this because it presents some of the oldest and most scientifically interesting landscapes Mars offers. The crater was once home to an ancient river delta. “As it is going to one of the most ancient parts of the Martian crust, it can help us nail down the past process of water loss to the crust much better,” said Sheller.

Will astronauts be able to get water from the crust and use it?

“Although much of the water that Mars had may still be locked away within its crust, that does not mean any future astronauts to the Red Planet will find it easy to extract that water to help them live there,” Scheller cautioned. “All in all, there still isn’t a lot of water in the Martian crust, so you would have to heat a lot of rocks to get an appreciable amount of water.”

The Perseverance mission is slated to last about two years. Will it support the research that Mars’ water is trapped in the crust?  We shall see.