On November 5, 2018, the NASA space probe Voyager 2 traveled through the Sun’s heliopause. Read on to learn more about what scientists have learned from this event.

Space is filled with gases; there are unseen by the human eye. If our eyes were capable of seeing these gases, we would see that our sun has a bubble protecting the planets. Scientists call this bubble the heliosphere. The sun fills it by emitting plasma called the solar wind. As a result, the plasma travels through space, past Pluto, until it hits interstellar plasma. Termination shock describes the point where the solar wind hits interstellar plasma and reaches the heliosheath. The heliosheath exists as the two mediums begin to mix. Scientists called the outside area of this bubble the heliopause, which is where Voyager 2 arrived on November 5th, 2018. Although Voyager 1 hit the heliopause in 2012, it could not take accurate readings because the instruments on board were not working. However, Voyager 2 instruments did work, causing great excitement in the scientific community.

NASA launched Voyage 2 in 1977. It has spent the last 42 years traveling to the edge of the sun’s heliosphere to reach interstellar space. Voyager 2 left the heliosphere behind and entered interstellar space at about 18 billion km (11 million miles) from Earth. One of the first discoveries involved the shape of the heliosphere. The Sun operates on an 11-year cycle and its output changes during that cycle.

Consequently, scientists have differing opinions as to the shape of the heliosphere. The overall view believes the way to exist as an oval. However, that shape changes as evidenced by the fact that the Voyages space probes encountered termination shock at different distances. Voyager 2 encountered the termination shock, exiting along the side, about 1 billion miles closer to the Sun than Voyager 1. Furthermore, scientists have learned that the side of the heliosphere has particles slipping through the boundary and into interstellar space. 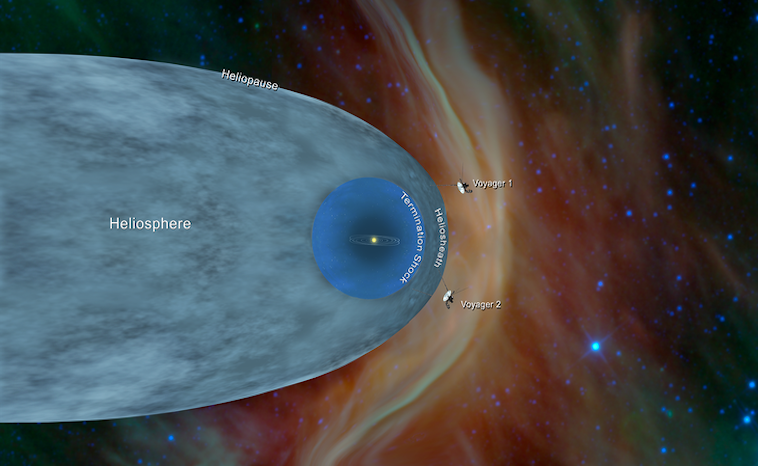 Scientists had learned more than what they planned when they started analyzing the data from Voyager 2.

“The Voyager probes are showing us how our Sun interacts with the stuff that fills most of the space between stars in the Milky Way galaxy,” said Ed Stone, project scientist for Voyager and a professor of physics at Caltech. “Without this new data from Voyager 2, we wouldn’t know if what we were seeing with Voyager 1 was characteristic of the entire heliosphere or specific just to the location and time when it crossed.” (NASA, 2019)

Voyager 2 observed a slight increase in plasma density just before it exited the heliosphere. Scientists believe that this shows that the plasma is compressed around the inside edge of the bubble. However, scientists don’t yet fully understand what is causing the compression on either side.

Unfortunately, the Voyager programs will come to an end in 2025. Scientists will collect data up until that point. After that, the Voyager space probes will continue on their path through space for all of eternity.