NASA is working with companies to develop drone delivery service for packages and people in crowded urban areas. Read on to learn more about this new technology.

The military and civilian population have used drones for many years. For example, the military takes pictures of enemy targets. Civilians may live streaming videos of a soccer game. Recently, NASA has become involved in developing drones as urban air transport devices to deliver goods and people. NASA wants a new era in air travel called Urban Air Mobility, or UAM. Their goal is a safe and efficient air transportation system. Therefore, they have teamed up with several organizations that specialize in delivery.  This includes everything from small package-delivery drones to passenger-carrying air taxis. Furthermore, drones or taxis would operate over populated areas – from small towns to the largest cities. 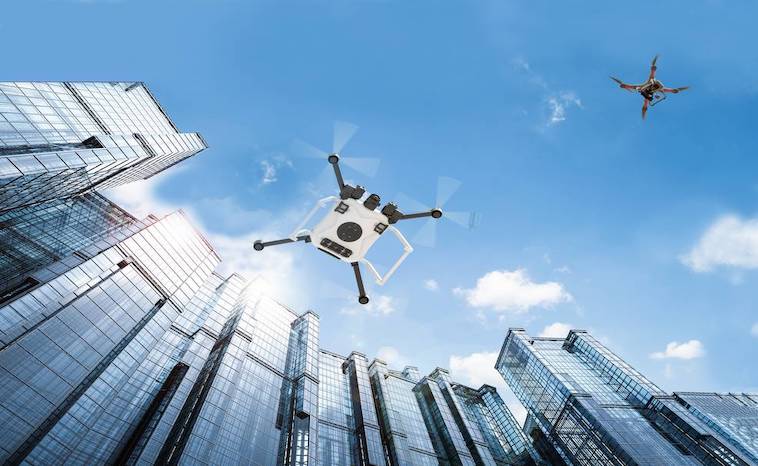 Researchers at NASA’s Ames and Langley Research Centers are developing technologies for UAM airspace management to make large-scale operations possible. At Ames, in California’s Silicon Valley, there’s an excellent foundation to build on. Researchers here have already studied, designed, and tested tools and technologies to manage the airspace for small drones flying at low altitudes. These technologies will allow operation even in complex urban landscapes. Does NASA believe that air taxi’s and drone delivery will be a reality in the coming years?

According to recent NASA-commissioned market studies, by 2030 as many as 500 million flights a year will occur for package delivery services. In addition, 750 million trips a year will transport people in air metro services. Consequently, a UAM operation would be a profitable business venture.

However, technical and bureaucratic barriers must be overcome. These barriers include significant legal, regulatory, infrastructure, and weather constraints. Furthermore, there are concerns about public perception related to noise, pollution, and safety.

The simulation objective was to study candidate procedures and routes for flying UAM traffic in Class B and D airspace in the Texas Dallas-Fort Worth airport (DFW) terminal area. In addition, they evaluated the corresponding impact of the UAM traffic level on controller workload.

The goals of the team include the following:

During the testing phase, the team learned a valuable lesson. “For example, we learned that the best way to fly drones in cities is for them to follow rivers or railroad tracks whenever possible to avoid flying directly over people,” said Ron Johnson, UTM’s project manager at NASA’s Ames Research Center.  Now that the initial testing phase is complete, it is time to bring experts from delivery companies and NASA together.

The Grand Challenge itself will be a full field demonstration in an urban environment. A series of tests would reveal the readiness of companies’ vehicles and airspace operators’ systems. These systems have to operate during a full range of passenger transport and cargo delivery scenarios under a variety of weather and traffic conditions.