A couple of days have past since the first of two comets made a close flyby Earth (the first was on March 21st, 2016 and the second was on March 22nd, 2016). And even though we hear about comets scooting past our small planet on many occasions, these two made headlines because they could be considered “twins.”

Discovered on January 22, 2016 by the University of Hawaii’s Pan-STARRS telescope on Haleakala (the island of Maui) Comet P/2016 BA14 was initially thought to be an asteroid. However, with closer observation and follow up by the University of Maryland and the Lowell Observatory team (with the Discovery Channel Telescope) revealed a faint tail, indeed making it a comet.

That alone may not have been a huge deal, but what was discovered next was definitely a surprise. Comet P/2016 BA14 follows an unusually similar orbit to that of comet 252P/LINEAR, which was discovered by the Massachusetts Institute of Technology’s Lincoln Near Earth Asteroid Research (LINEAR) survey on April 7, 2000. This “coincidence” may very well be an indication of a twin comet as P/2016 BA14 is roughly half the size of comet 252P/LINEAR. This leads experts in the field to theorize that perhaps a fragment might have split off sometime in the larger comet’s past. 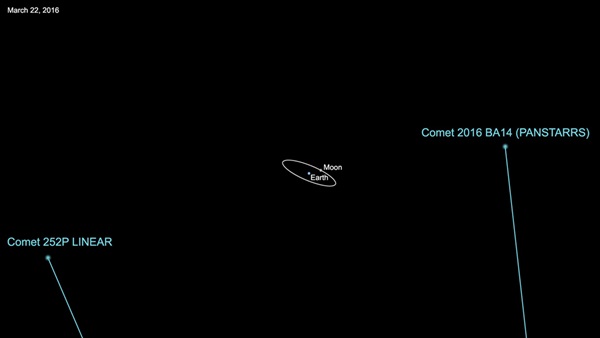 Courtesy of NASA/JPL-Caltech, this image shows the path the comets took.

A statement made by Paul Chodas from NASA’s Center of NEO Studies (CNEOS) at the Jet Propulsion Laboratory in Pasadena, California elaborates on this “tail” of two comets.

“The two could be related because their orbits are so remarkably similar. We know comets are relatively fragile things, as in 1993 when comet Shoemaker-Levy 9 was discovered and its pieces linked to a flyby of Jupiter. Perhaps during a previous pass through the inner solar system, or during a distant flyby of Jupiter, a chunk that we now know of as BA14 might have broken off of 252P.”

Although, more studies will be conducted by the Hubble Space Telescope (comet 252P/LINEAR) and by NASA’s Infrared Telescope Facility (comet P/2016 BA14) we do know this much about the twin space rocks;

Since these comets are on a steady course, the Earth can expect to see them again in the very very distant future.

“March 22 will be the closest comet P/2016 BA14 gets to us for at least the next 150 years,” said Chodas. “Comet P/2016 BA14 is not a threat. Instead, it is an excellent opportunity for scientific advancement on the study of comets.”

Comets are also a fascinating topic so if you want more information on upcoming comet flybys, check out the CNEOS website which has a complete list of recent and upcoming close approaches, as well as all other data on the orbits of known NEOs.