The Gateway Foundation is working on making a rotating spaceport for future space travel. Read on to find out more about this exciting new addition to the space community.

The Gateway Foundation has begun work on a spaceport called the Von Braun Station. Its name reflects a tribute to German aerospace engineer Dr. Werner Von Braun. The spaceport design involves a rotating ring concept. Why does the station need to rotate? The rotation provides artificial gravity, which is necessary for the human body to function correctly. Arthur C. Clark’s novel 2001: A Space Odyssey featured a rotating space station and was made into a movie by Stanley Kubrick under the same name.

Astronauts that have spent long periods in space suffer from some significant medical issues. NASA conducted the Twin Study to find out what happened to a set of astronaut twins named Mark and Scott Kelly. Identical twins share the same genetic makeup. The twin studies provided a way for scientists to explore how the environment around us impacts our health. This is independent of the physical variations that naturally occur between most of us as individuals. Scott provided a test case to measure in space, and Mark provided a baseline test case to compare those measurements on Earth.

The study concluded the following from Scott Kelly; the one who was in space for one year :

What happens when astronauts land on Mars which has a -38% gravity?

According to the Gateway Foundation, the Von Braun spaceport will have two concentric rings. These rings will be fixed together with a set of spokes. These spokes will connect to an outer habitation ring with large modules. The inner ring is an unpressurized structure known as the docking hub. It is designed to capture and lock in place visiting space vehicles. The plans are to have two docking stations, but in the beginning, there will only be one. Once an astronaut departs from their space vehicle, he or she can access a tube that connects to a triangular truss. This allows them to walk about the spaceport.

Construction of the spaceport design changed from Dr. Von Braun’s original design in the 1950s. The original design did not provide for a way to escape the spaceport. With their new design, each pod is separated with a space vehicle near the pod. A tube allows access to individual models. With this design, people will not have to walk through someone else’s tube to get to their own. 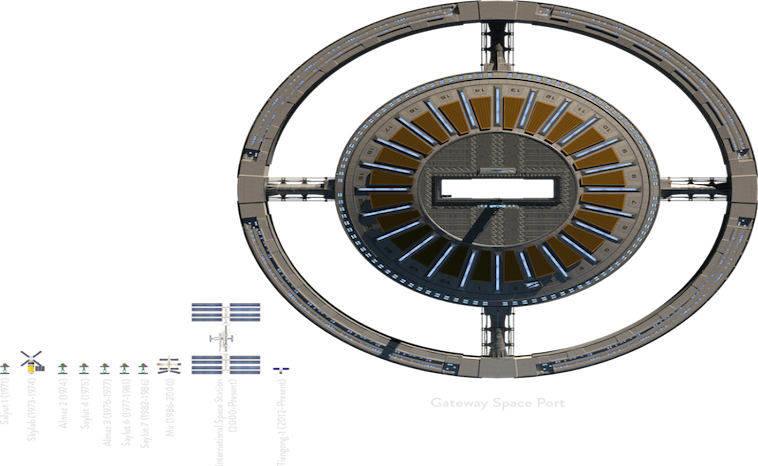 According to Gateway Foundation CEO John Blincow stated the following about the benefits of a spaceport that spins.

“People need gravity so that bodies don’t fall apart. But how much will lunar gravity be okay for a year but not for two years? Will Martian gravity work for humans long-term, but not for large farm animals? Will two days a week at 30% g be enough for ISS crews to retain bone mass? Building the von Braun space station can help unlock those secrets.”

Meanwhile, the high-ceiling interior ring of the LGA will offer tourist the opportunity to dine and play in a low-g environment. At the core of the station are the Hub and Bay, where traffic and environment control, security, and the Gateway’s transportation nexus will all be located. The Hub will also have an observation lounge where guests can watch incoming shuttles.

SpaceX could play in the creation of the station. Their super-heavy rocket can haul the larger components needed to build the spaceport. The end result of this will be an international station not unlike the ISS, but a privately-run venture that would be economically self-sustaining. However, no indication is given as to how much the construction of the Gateway will cost, but Blincow is confident that it will be affordable, thanks again to SpaceX and the way its commitment to reusable rockets is bringing the cost of individual launches down.

Will the Gateway Foundation be able to build the spaceport? It will take massive funding and help from the international community. However, if they are able to secure those two things, the possibilities for their project are endless.