The Perseverance Rover is set to land on Mars in February 2021. On board, it carries collection tubes for samples to return to Earth. Read on to learn more about these tubes and how NASA has prepared them for space travel.

Collecting samples from Mars is serious business. Anything from Earth sitting inside the collection containers will contaminate samples, therefore corrupting whatever information scientists hoped to collect. Perseverance’s sample tubes must stay clean prior to their use on Mars. How do the NASA scientists clean the tube and keeps them pristine?

Once NASA’s Perseverance Mars Rover begins exploring Jezero Crater and coring Martian rock, it’ll leave behind special tubes filled with the samples. In order for those samples to remain safe and contaminant-free, the Mars 2020 team developed the cleanest and sturdiest tubes to store them.

“We are working on something that is the cleanest we’ve ever attempted to send into space. The Perseverance’s main mission is astrobiology,” says Ken Farley, Mars 2020 project scientist. They plan to collect 35 samples from Mars each weighing about 15 grams. A mouse weighs about 20 grams. What do they hope to learn from these samples?

According to Ian Clark, assistant project system engineer, the samples may help them learn if there was once life on Mars. 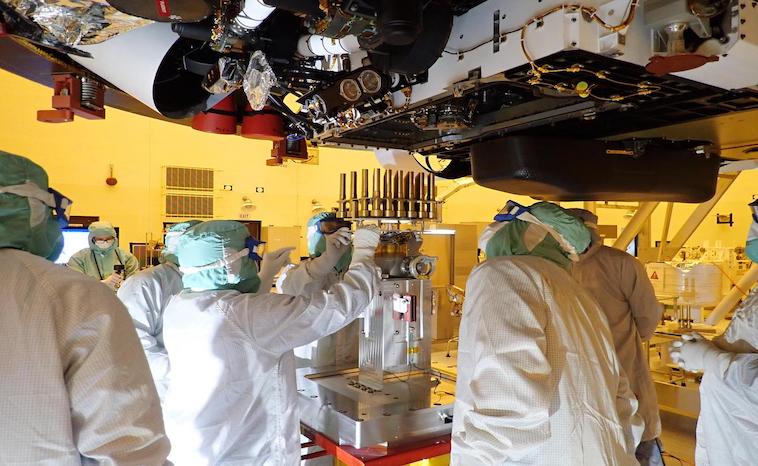 Inside the belly of Perseverance sits several robotic arms and a collection area suited to hold the sample tubes. Engineers took extraordinary steps to ensure a spotless environment. Their biggest fear lies in the fact that “life” inside a collected sample may link back to Earth because of contamination.

“Made chiefly of titanium, each sample tube weighs less than 2 ounces (57 grams). A white exterior coating guards against heating by the Sun, potentially changing the samples’ chemical composition after Perseverance deposits the tubes on the surface of Mars. Laser-etched serial numbers on the exterior will help the team identify the tubes and their contents.” (NASA, 2020)

“They are less than 6 inches [15.2 centimeters] long, but we still found over 60 different dimensions to scrutinize,” said Sample Tube Cognizant Engineer Pavlina Karafillis of JPL. “Because of the intricacies of all the complex mechanisms they will pass through during the Mars Sample Return campaign, if any measurement was off by about the thickness of a human hair, the tube was deemed not suitable for flight.”

Once they machined Perseverance’s sample tubes, they had to look at the tubes with special equipment to see what Earthly elements hid inside. Surprisingly, they found traces of carbon. They learned they had to polish the interior bore prior to adding special protective coatings. Furthermore, they had to invent an entirely new technique for cleaning all the hardware. In addition, they had to demonstrate that the tubes would remain clean during the seven-month-long trip to Mars.

The sample tubes were cleaned with filtered air blasts between assembly steps, rinsed with deionized water, and sonically cleaned with acetone. In addition, they use isopropyl alcohol and other exotic cleaning agents. Each tube generated over 250 pages of documentation and 3 gigabytes of images and videos. (NASA, 2020)

NASA and the European Space Agency plan to send a “fetch” rover to retrieve the samples sometime in 2026.