In honor of belated astrophysicist, Andre Brahic, (who discovered this planet’s three outer rings) we are going to take a journey around Neptune. Buckle up as it’s going to be a fascinating ride!

There’s so much more to Neptune than just Brahic’s three-ring discovery. This big blue marble was located in 1846 and at the time was the most distant planet in our solar system. However, soon after Neptune’s “appearance” Pluto was discovered and took Neptune’s place as the most distant planet from Earth. As we all know, Pluto held firm with this title until 2006 when it was demoted to a dwarf planet.

Neptune is the Smallest Gas Giant

Even though Neptune has a radius of 15,387 miles (24,764 kilometers), it is still the smallest out of all the gas giants (Jupiter, Saturn and Uranus). But here’s the kicker; Neptune is actually more massive (about 18%) than Uranus. And because of it being smaller, it has a much higher density rate. This fact makes it the densest of all the gas planets.

Neptune Has an Earth-like Gravity

If you could stand on Neptune, you’d soon realize that you were sinking, and fast. This is because the surface of this planet is made up of gas and ice (with most likely a rocky core). However, you’d also notice that the gravity is almost identical to Earth. In fact, Neptune’s gravity pull is only 17% stronger than ours! 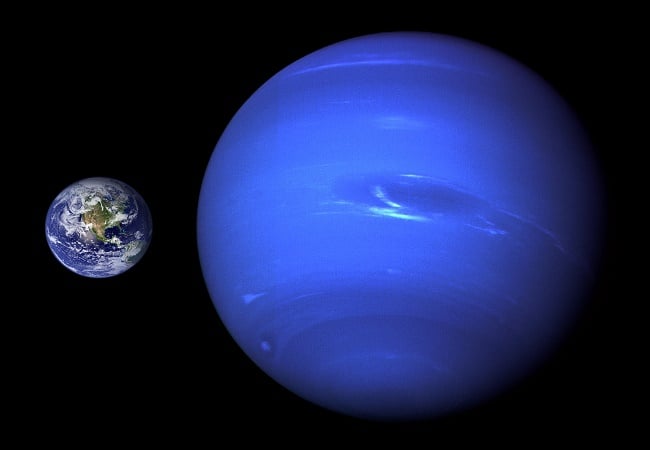 Forget about that sinking feeling you would get standing on Neptune, because the hurricane force winds would blow you away. That’s right! Neptune’s winds blow at a whopping speed of 1,304 miles/hour (2,100 kilometers/hour)! According to Universe Today, scientists speculate these high winds may be due to the cold temperatures and the flow of fluid gasses in the planet’s atmosphere. These may reduce the friction to the point that it’s easy to generate winds that move so quickly.

Even if you could survive the gas/icy surface and hurricane-force winds, Neptune’s frigid temperatures would instantly freeze you. At the top of its clouds, temperatures on Neptune can dip down to 51.7 Kelvin, or -221.45 degrees Celsius (-366.6 °F). That’s almost three times the coldest temperature ever recorded here on Earth which measured in at -89.2°C (-129°F).

Of course, when we hear about rings around planets, we most likely think about Saturn. But Neptune also has rings; five in fact. These rings are not the easiest to spot because they are dark, which is likely due to the presence of organic compounds. Scientists have discovered that at least 20% of Neptune’s rings are composed of dust (with some containing as much as 70%). These tiny specs are micrometer-sized and very similar to the particles that make up the rings of Jupiter. The rest of the ring materials consists of small rocks.

It would be fascinating to have the ability to visit Neptune; however, with the help of specifically engineered spacecrafts, we have learned so much about this big blue gas giant. Check out this video which gives us an up close look at this celestial wonder.