NASA has unveiled two new spacesuits in preparation for a lunar landing in 2024. Read on to learn more about the improvements and changes they have made.

NASA plans to put people back in on the moon in 2024. Since it has been over 45 years since the last lunar landing, changes needed to be made to the astronaut’s spacesuits. The two NASA spacesuit prototypes are designed for two separate parts of a crewed mission to the moon. The Exploration Extravehicular Mobility Unit (xEMU)  is a red, white, and blue suit designed to be worn by astronauts exploring the lunar surface. The second suit is part of the Orion Crew Survival System. This bright orange pressure suit will be worn by astronauts when they launch into space on the Orion capsule and return to Earth.

NASA’s primary goal revolves around comfort and safety. One, they do not want the astronauts to bunny hop like in previous missions. Instead, they want them to walk as they do back on Earth. Second, they plan the lunar explorations to last longer hours. The xEMU suit is designed to accommodate a wide variety of sizes. Since people come in all shapes and sizes, NASA intends for the suit to fit better.  Working in a pressurized spacesuit, in an extreme environment, poses a challenge to astronauts. NASA believes they have solved many of the problems from 47 years ago.

The Orion launch and entry suit was designed for flights to and from the moon. Although it looks much like a jumpsuit, the suit can pressurize in case of an emergency. Astronauts can comfortably work and, if needed, can pressure up to in an unstable environment. 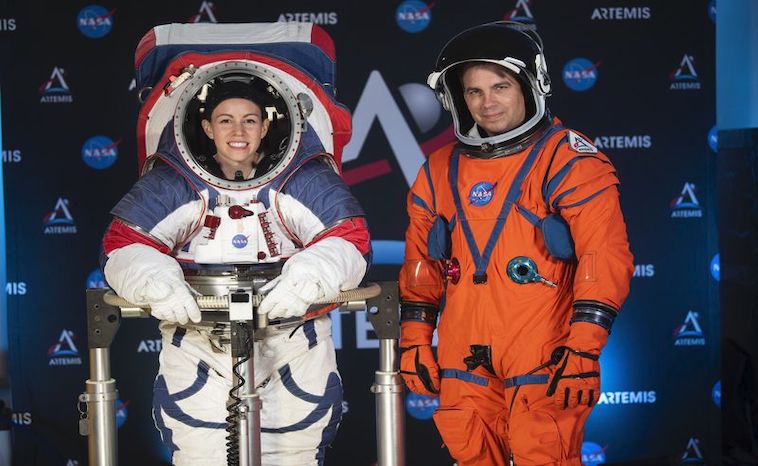 The NASA spacesuit works to allow for more natural movement so that an astronaut can move their arms in a full circle. Furthermore, the spacesuit’s design helps so that the side or shoulder bearings can move “as far inward toward their neck as you can get it. An adjustment mechanism allows you to move that side bearing in for smaller folks or out for a little bit larger folks,” said Amy Ross, the lead spacesuit engineer for xEMU at NASA’s Johnson Space Center. “With that sizing feature in an upper torso, we’re able to accommodate the full range of folks that need to fly the suit.”

“The mobility is one of the biggest things,” NASA astronaut Kate Rubins said at the spacesuit unveiling. “If you need to pick up a rock … if you’re planting a scientific instrument, you need that upper torso mobility.”

Additionally, the suit has improved seams and design. These will help prevent issues concerning lunar dust entering the spacesuit. New carbon dioxide scrubbing technology will allow astronauts to spend more time exploring outside the spacecraft. NASA believes their explorations may last up to 8 hours or possibly 9 hours.

Missions Past The Moon

Not only will the suits be used for lunar purposes, but NASA plans to use them for missions to Mars as well.

“We plan to go to Mars. Our plan is to have people work in spacesuits a lot, so these tools should be very comfortable and non-injury inducing,” Ross said. In addition, they are designed to be updated, especially in terms of their electronics and internal technologies.

We look forward to seeing how the new NASA spacesuits will fare on their lunar mission in 2024.