NASA’s InSight lander has recorded quakes on Mars. Read on to learn more about this new discovery.

In November 2018, NASA’s InSight lander arrived on Mars to gather information for future manned missions. The lander had several tools onboard, including a seismometer, internal probe, camera, and antennae. They were looking for evidence of Marsquakes.

According to articles published in the journals Nature Geoscience and Nature Communications, the red planet remains active. Over seven months, InSight’s seismometer recorded over 400 quakes. Furthermore, the seismometer traced the shocks back to fissure Cerebus Fossae. The Cerberus Fossae is a fissure that transverses the surface for hundreds of miles. Did that fissure occur long ago? Or is it a more recent faultline?

Scientists suggest that the underlying cause for the faultline is the deformation caused by the Tharsis volcanoes to the east. Furthermore, the planet’s faults are quite young. They cut through pre-existing features such as the hills of the Tartarus Montes and the lava apron southeast of Elysium Mons. Crater counts suggest the last outflow from the Cerberus Fossae took place about 2 to 10 million years ago. The fissure sits about 1,000 miles from InSights location.

Scientists recorded The quakes registered about 3.6 on the Richter scale.

However, they do not know the origin of the quakes. Earthbound quakes arise when our planet’s tectonic plates grind up against one another. Mars lacks the same internal architecture, leaving researchers puzzled about the source of its quakes. 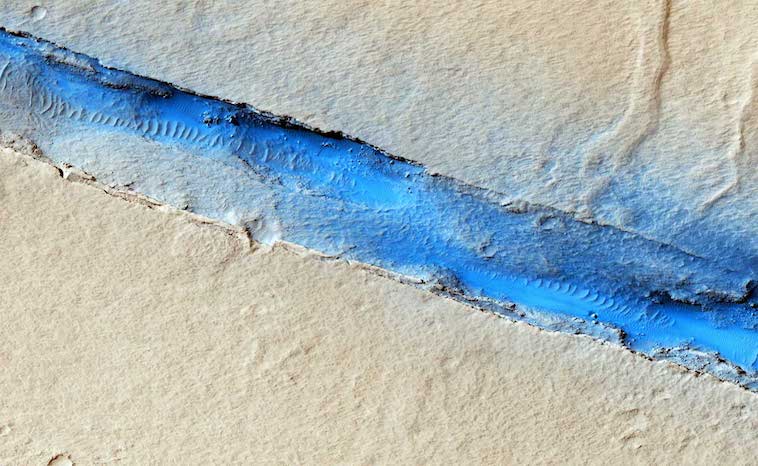 Scientists also reveal that the quakes were more frequent than quakes on Earth’s moon. They also placed the quakes in two categories. Low-frequency tremors indicate that they traveled through Mars’ deeper mantle. The other quakes were smaller, ran closer to the surface, and had higher wavelengths. “Were they to happen on Earth, most marsquakes would barely be detectable,” says seismologist Philippe Lognonné

Based on InSight’s data, researchers think pockets of magma may still be moving, cooling, and contracting deep inside the red planet. The movement may be causing cracks, then quivers, at its brittle rocky surface.

Another surprise has come from data collected by InSight’s magnetometer. It has picked up on a local magnetic field about ten times stronger than researchers expected to see. Though Mars once had a magnetic north and south like Earth, its internal dynamo, or liquid metal interior, stopped churning billions of years ago. As a result, it stripped the planet of its global magnetic field.

The field comes from ancient rocks that formed and became magnetized when Mars still had a global magnetic field, billions of years ago. However, magnetic minerals still exist in Martian rocks, locked in like a time capsule of the planet’s long-gone magnetism. “They’re like little tape recorders,” said InSight team member Catherine Johnson.

We are delighted about this first achievement and are eager to make many similar measurements with SEIS in the years to come,” said Charles Yana, SEIS mission operations manager.

We shall continue to update InSight’s discoveries on planet Mars.