After waiting seven long months, NASA’s InSight rover safely landed on Mars this week. Read on to learn what will happen next for this special rover.

NASA celebrated the arrival of it’s rover InSight marking the end of a seven-month-long mission. It will have cruised 301,223,981 miles (484,773,006 kilometers), entering the Martian atmosphere at a top speed of 12,300 mph (19,800 kilometers per hour). It landed at Elysium Planitia, about 4.5 degrees north latitude and 135.9 degrees east longitude. InSight sits about 373 miles (600 kilometers) from Curiosity’s landing site, Gale Crater.  What will happen next?

They will use a replica of InSight and an indoor “Martian” sandbox. Presumably, everything will go as planned and they will have the ability to calibrate and lift each instrument onto the surface. Elysium Planitia has just the right surface for the instruments to be able to probe the deep interior, and its proximity to the equator ensures that the solar-powered lander is exposed to plenty of sunlight. InSight will use its weather sensors and magnetometer to take readings from its landing site. 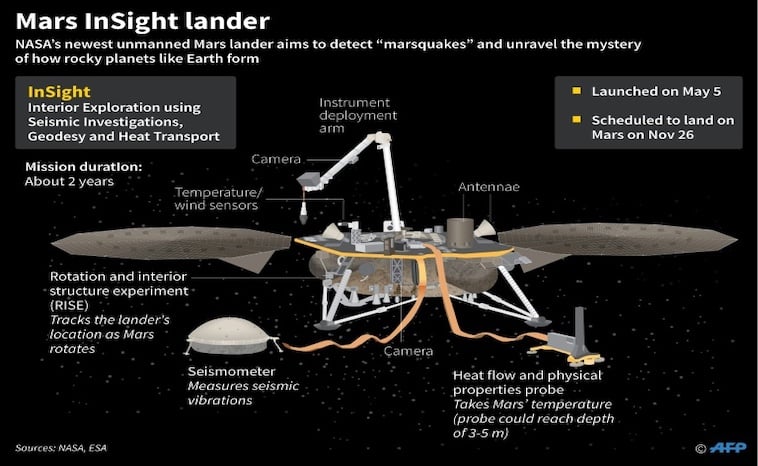 InSight sent signals to Earth indicating that its solar panels were open and collected sunlight on the Martian surface. The ability to collect sunlight allows InSight to recharge its batteries each day.

“The InSight team can rest a little easier tonight now that we know the spacecraft solar arrays are deployed and recharging the batteries,” said Tom Hoffman. He is InSight’s project manager at NASA’s Jet Propulsion Laboratory in Pasadena, California, which leads the mission. “It’s been a long day for the team. But tomorrow begins an exciting new chapter for InSight: surface operations and the beginning of the instrument deployment phase.” (NASA, 2018)

InSight’s twin solar arrays are each 7 feet (2.2 meters) wide.  Mars has weaker sunlight than Earth. However, the lander doesn’t need much to operate. The panels provide 600 to 700 watts on a clear day, enough to power a household blender.  Even when dust covers the panels, they should be able to provide at least 200 to 300 watts.

CubeSats Wall-E and Eve Help Out

In addition, NASA celebrated the fact their two CubeSats worked. Two briefcase-sized satellites named Wall-E and Eve provided information quickly about the landing. In fact, it took merely 8 minutes for radio waves to reach Earth from Mars. At that point, engineers knew everything went well.

“WALL-E and EVE performed just as we expected them to,” said MarCO chief engineer Andy Klesh of NASA’s Jet Propulsion Laboratory in Pasadena, California. “They were an excellent test of how CubeSats can serve as ‘tag-alongs’ on future missions. Consequently, giving engineers up-to-the-minute feedback during a landing.” (NASA, 2018)

We will watch for further information coming in the next months for information that InSight relays back to NASA. It will be an exciting mission for everyone watching as events unfold on the red planet.

Tracking the Stars with an Ancient Medicine Wheel