NASA plans to send many different types of data collection instruments to Mars in the coming years. One of them is a type of aluminum cardboard. Read on to learn more about this cardboard and what it can do for NASA.

Researchers from the University of Pennsylvania have developed a new type of collection instrument. They call it a photophoric levitation nanocardboard plate. Simply put, they have developed levitating nanocardboard. As simple as that sounds, it involves many scientific design processes to make it float and collect information at the same time.

How does one make cardboard levitate above the Earth? Let’s start with the fact that the “cardboard” is layers of silicon and aluminum. Engineers call it nanocardboard. It has plates with have several hollow layers only a few nanometers thick. A nanometer is one-billionth of a meter thick. Each one weighs about a third of a gram. For comparison, that equals the weight of a fruit fly. 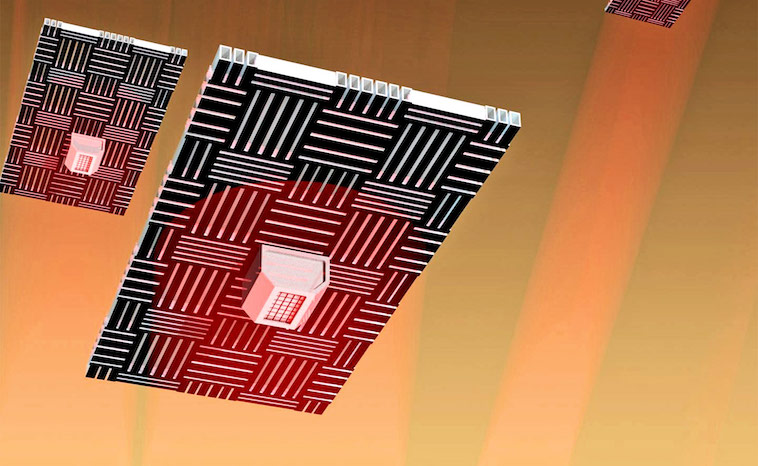 The human eye cannot see a nanometer without the aid of a microscope. Furthermore, the aluminum plates have ridges made by a pattern of microchannels. These micro-channels keep them stiff and unbroken. Tiny holes are made to allow gases to flow through the plate. Air and gases push through the hollow plates the nanocardboard floats.

A paper in the journal, Advanced Materials, describes the scientific process used by engineers. It took a high level of math and understanding of Newton’s laws to get the pieces to float. Lead author Igor Bargatin of the School of Engineering and Applied Science at the University of Pennsylvania stated the necessity of the invention. Similar to CubeSats, the nanocardboard plates would give scientists multiple collection points. Bargatin referred to the new Mars helicopter getting ready to travel with Perseverance this summer to Mars. The helicopter will allow scientists to collect information about Mars on a larger scale. However, if something happens to the helicopter, they are no longer collecting data.

“If anything goes wrong, your experiment is over, since there’s no way of fixing it. We’re proposing an entirely different approach that doesn’t put all of your eggs in one basket,” says Bargatin.

Researchers wanted the nanocardboard plates tested in a laboratory environment that replicated the atmosphere on Mars. As a result, they used a low-pressure test chamber. It allowed limited air current, similar to Mars. “The air current through the micro-channels is caused by a classical phenomenon called ‘thermal creep,'” explained co-author Howard Hu. “Thermal creep is a rarefied gas flow due to the temperature gradient along the channel wall.” In addition, they experimented with mock payloads by having the little floating plates carry silicone rings.

“In addition to carrying sensors,” Bargatin said, “our flyers could simply land and have grains of dust or sand passively stick to them, then transport them back to the rover, so it doesn’t need to travel as far.”

Bargatin also sees these for use on Earth. The Earth’s mesosphere is pretty similar to the Martian atmosphere. He refers to the atmospheric densities on both planets. “We currently don’t have anything that flies there. It is too low for space satellites but too high for airplanes and balloons,” Bargatin said. “Ideally, you’d like to have some sensors up there as well. The more knowledge you have about the movement of the atmosphere at that level, the better predictions you can make about Earth’s climate and even weather.”