A dwarf galaxy’s movement has revealed more evidence for dark matter in our universe. Read on to learn more about this new discovery.

Our Milky Way is a galaxy with multiple spiral arms emanating from a central disk. The empty-looking halo lies outside of these swirling arms. However, according to a new study in Nature, the halo may hold more than what scientists previously thought. The halo, which hosts a small population of stars, may also contain much dark matter. This mysterious substance, invisible to scientists, has eluded them for decades. Yet, they believe that it comprises most of the mass in the universe.

This new data provides confirmation and the most detailed and accurate map of the galaxy’s outskirts. 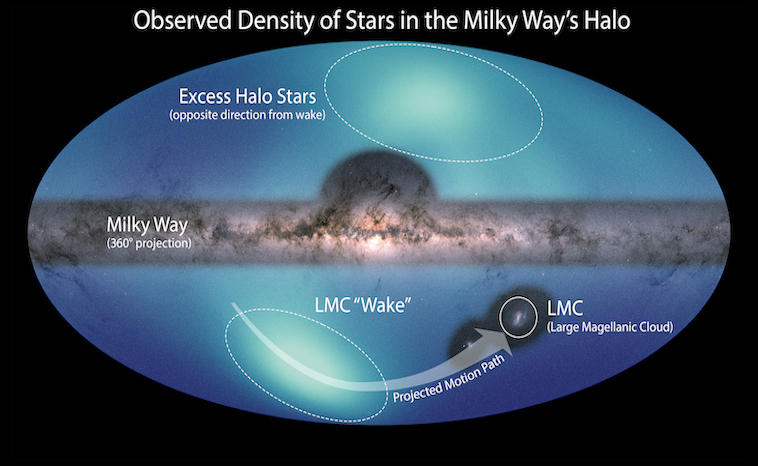 In the image, the strip in the middle represents a 360-degree view of our galaxy, overlaying a map of the galactic halo. A bright wave in the bottom left of the image is the wake of stars. To the right lies the Large Magellanic Cloud and the path it is taking. Finally, a large, light blue feature in the top right shows a high concentration of stars in our galaxy’s northern hemisphere.

The wake created by the Large Magellanic Cloud is about 200,000 light-years to 325,000 light-years from the galactic center. “This robbing of a smaller galaxy’s energy is not only why the (Large Magellanic Cloud) is merging with the Milky Way. It explains why all galaxy mergers happen,” said Rohan Naidu, a study co-author from Harvard University. “The wake in our map is a really neat confirmation that our basic picture for how galaxies merge is on point.

Even though dark matter is invisible, it provides structure throughout the universe, including the foundation for galaxies.

While it sounds violent, galactic collisions are what have created the massive galaxies populating our universe. Our own galaxy has previously experienced mergers before.

The map, made with data from NASA and European Space Agency (ESA) telescopes, also provides some vital insights into our home galaxy’s violent future. As the LMC orbits the Milky Way, the gravitational tug from the dark matter in the Milky Way’s galactic halo is slowing it down, sending the LMC into smaller and smaller orbits. Nevertheless, the LMC will continue to be reeled closer to the Milky Way until the two will collide in about 2 billion years.