Ask anyone about the planet Jupiter and the first thing they will mention is its Great Red Spot. First recorded in 1830, the massive storm continues to rage to this day. However, many people do not know about Jupiter’s other strange storms that present themselves as geometric shapes. Where does one look for these unusual storms?

Looking at Jupiter’s south pole, one will see not only one cyclone but several clusters of cyclones. However, cyclones on Jupiter are not limited to just the south pole. In 2018, NASA reported the existence of cyclones at the north pole as well. This discovery surprised scientists due to their massive size. For example, one cyclone about 2,485 miles (4,000 kilometers) wide has eight cyclones each of similar diameter around it. In previous flybys, NASA recorded that the south pole cyclone, about 3,975 miles (6,400 km) wide, is encircled by five cyclones ranging in size from 3,480 miles to 4,350 miles (5,600 km to 7,000 km). These cyclones lasted for several months. In each cluster, the cyclones were close enough to each other to essentially be in contact.

In November 2019, NASA’s Juno discovered another massive cyclone amongst many others. 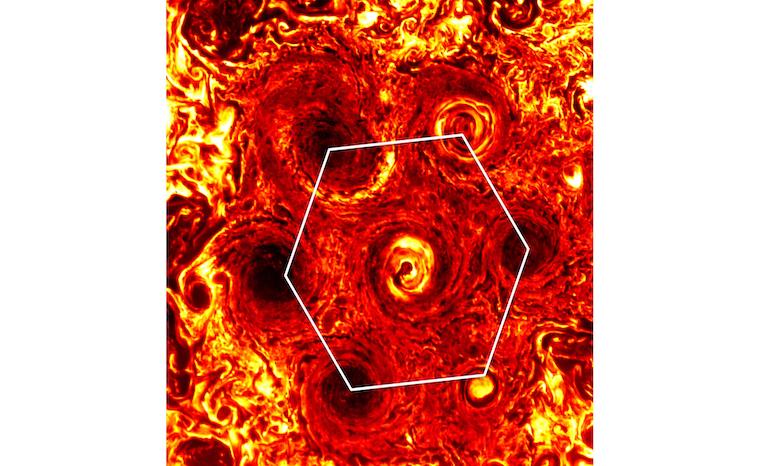 From Pentagon to Hexagon

“Data from Juno’s Jovian Infrared Auroral Mapper [JIRAM] instrument indicates we went from a pentagon of cyclones surrounding one at the center to a hexagonal arrangement,” said Alessandro Mura, a Juno co-investigator at the National Institute for Astrophysics in Rome. The new cyclone is still quite small measuring the size of the state of Texas. Scientists predict that it will grow to the same size as the other five cyclones. The other five cyclones together measure about the size of the continental United States. (NASA,2020)

Probes sent down measured the wind speed of the new cyclone at 225 mph (362 kph). To put things in perspective, cyclones on Earth reach catastrophic levels at winds speed of 155 mph. Furthermore, cyclones only make a singular appearance.  To form a cyclone, warm, moist air over the ocean rises upward from near the surface. As this air moves up and away from the ocean surface, it leaves is less air near the surface. So basically as the warm air rises, it causes an area of lower air pressure below.

NASA scientists predict that wind speed will increase as the cyclone grows larger. “Nature is revealing new physics regarding fluid motions and how giant planet atmospheres work. We are beginning to grasp it through observations and computer simulations. Future Juno flybys will help us further refine our understanding by revealing how the cyclones evolve over time,” Cheng Li, a Juno scientist from the University of California, Berkeley.

What Will Juno Learn Next?

Several questions arise with the formation of the new cyclone.