What has Juno discovered while visiting Jupiter over the last two years? Read on to learn more about this amazing mission.

In 2011, NASA launched its Juno spacecraft to study the planet Jupiter. It arrived in July 2016. At its closest, Juno passes within 3,000 miles (5,000 kilometers) of Jupiter’s cloud tops once during each 53-day orbit. At the high end of each orbit, Juno is about 5 million miles (8-million kilometers) from the planet. What has it learned over the last two years?

One of the first discoveries revealed that Jupiter’s poles are covered in Earth-sized swirling storms. These storms rub together in deep clusters. Furthermore, the iconic belts and zones near the equator penetrated far beneath the clouds. While zones at other latitudes seem to evolve to other structures below the surface.

Measuring in at 10,159 miles (16,350 kilometers) in width (as of April 3, 2017) Jupiter’s Great Red Spot is 1.3 times as wide as Earth. The storm has been monitored since 1830 and has possibly existed for more than 350 years. In modern times, the Great Red Spot has appeared to be shrinking. (NASA, 2018) JunoCam images revealed a tangle of dark, veinous clouds weaving their way through a massive crimson oval.

The solar system’s most famous storm appears to have roots that penetrate about 200 miles (300 kilometers) into the planet’s atmosphere.

Jupiter has the most powerful auroras in the solar system. Juno scientists observed signatures of powerful electric potentials that aligned with Jupiter’s magnetic field. It accelerates electrons toward the Jovian atmosphere at energies up to 400,000 electron volts. 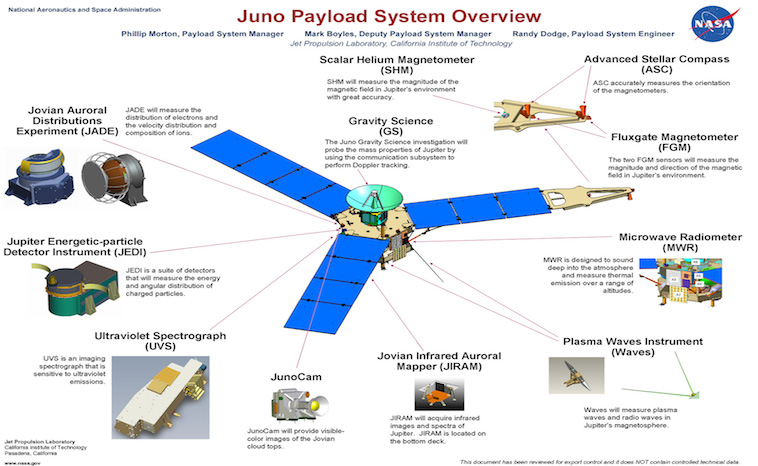 A cyclone is a system of winds rotating inward to an area of low atmospheric pressure, with a counterclockwise (northern hemisphere) or clockwise (southern hemisphere) circulation. Hurricanes, typhoons, and tornados are all types of cyclones. Jupiter has cyclones as well. Using the spacecraft’s Jovian Infrared Auroral Mapper (JIRAM) instrument scientists captured light emerging from deep inside Jupiter both day and night. Cyclones and anticyclones that permeate the planet’s polar regions generate this energy and power a massive magnetic field.

Juno also captured lightning strikes that differed from here on Earth. On Earth, lightning tends to strike mostly near our Equator. On Jupiter, they tend to strike near the poles.

In June, NASA approved an update to Juno’s science operations until July 2021. This provides for an additional 41 months in orbit around. Juno is in 53-day orbits rather than 14-day orbits as initially planned because of a concern about valves on the spacecraft’s fuel system. This longer orbit means that it will take more time to collect the needed science data, but an independent panel of experts confirmed that Juno is on track to achieve its science objectives and is already returning spectacular results. (NASA, 2018)

With an increase in orbit size, NASA will further explore the far reaches of the Jovian magnetosphere. That is the region of space dominated by Jupiter’s magnetic field. This includes the far magnetotail at the southern magnetosphere.

Juno will make its 13th science flyby over Jupiter’s mysterious cloud tops on July 16, 2018. We look forward to learning more about Jupiter and the information revealed by its continued exploration by the Juno Spacecraft.