It appears the lander named Philae may have gone on a permanent hiatus from its journey on Comet 67P/Churyumov-Gerasimenko or Comet 67P for short. Despite their best efforts to contact the lander, there’s hasn’t been a peep or a signal from this high-tech machine since July 9th, 2015. This has researchers fearing the worst.

Although, the “mother ship” Rosetta continues to try and make contact with Philae, at this point it seems like the mission to explore Comet 67P may have come to an end. Stephan Ulamec from the German Aerospace Center, DLR. sheds some light on the situation and states;

“The chances for Philae to contact our team at our lander control center are unfortunately getting close to zero. We are not sending commands any more, and it would be very surprising if we were to receive a signal again.” 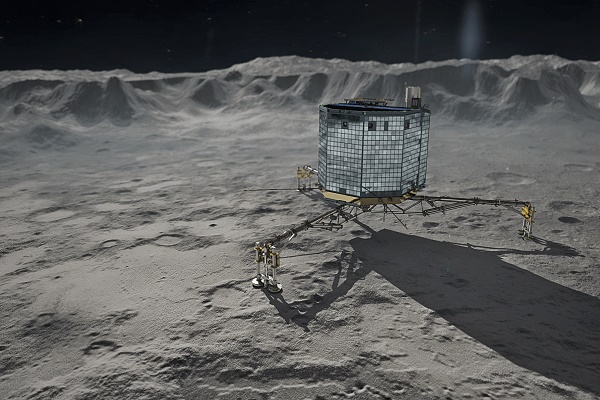 A team of expert engineers and scientists hailing from the German, French, and Italian space centers and across Europe have been diligently working to carry out extensive investigations to gain some understanding of the status of Philae. To do this they have been piecing together clues since its first completed scientific findings after November of 2014.

The Landing of the Lander

The story of Philae began with a bumpy landing…a few in fact. Not only did Philae’s thruster fail, but the lander was not able to fire its harpoons to hook itself onto the rough surface of the comet after a harrowing seven hour descent to the rock. This caused the machine to bounce from its originally intended landing zone at Agilkia to Abydos, which is over 0.6 miles (1 kilometer) away and the precise location of the lander is still yet to be confirmed in high-resolution images.

To help find some answers to where Philae may be, researchers have attempted to reconstruct the flight of the lander. This suggests that Philae made contact with the comet four times during its two-hour additional flight across the small comet lobe. The team seems to think after bouncing from Agilkia, it grazed the rim of the Hatmehit depression, bounced again, and then finally settled on the surface at Abydos.

Albeit a short journey on Comet 67P, Philae was able to transmit back about 80 percent of its planned scientific activities. In 64 hours of operational time, the lander was able to find organic compounds and also profiled the local environment and surface properties, “providing revolutionary insights into this fascinating world.”

Will Philae Ever Reboot?

Because the lander relies on the Sun to recharge its secondary batteries, scientists raced to collect as much data as they could before Philae fell into hibernation. No easy task considering the information has to transmit over 320 million miles (510 million kilometers) of space back to Earth. As expected the lander went silent on November 14th-15th of 2014. Still, hopes of the team were high knowing on August 13th 2015, the comet would move closer to the Sun, which may be enough to reboot its batteries.

On June 13, 2015, much to the researcher’s surprise, Philae made contact with the orbiting Rosetta and sent in a detailed report of its thermal, power and computer subsystems and also the fact that it had indeed “woken up” on April 26th 2015, but was unable to send out any signals until June 13th. Despite the improved conditions inside of Philae, after July 9th, Rosetta was no longer able to hail the lander on Comet 67P.

Although, Rosetta has its own comet to conquer, it still tried to reach Philae, but with increased levels of out-flowing
gas and dust, the conditions were just too challenging for Rosetta to safely operate within the 124 miles close enough (200 km) to where the signals had previously been detected from Philae.

However, just recently since the comet’s volatile behavior has subsided some, Rosetta was able to reach around 28 miles (45 km) and has made repeated passes over Abydos. Unfortunately, there was still no signal from Philae.

Engineers think the failure may be due to the transmitters and receivers, as well as a massive amount of dust covering its solar panels, which will prevent the lander from being able to power-up. In addition, the team is speculating that Philae may have changed locations due to Comet 67P’s activity, which would mean Philae’s antenna would be pointed in the wrong direction. According to Sylvain Lodiot from ESA;

“The comet’s level of activity is now decreasing, allowing Rosetta to safely and gradually reduce its distance to the comet again. Eventually, we will be able to fly in ‘bound orbits’ again, approaching to within 6-12 miles (10-20 km) — and even closer in the final stages of the mission — putting us in a position to fly above Abydos close enough to obtain dedicated high-resolution images to finally locate Philae and understand its attitude and orientation.”

As all things do in space, Rosetta, Philae and Comet 67P are all heading back towards the outer reaches of our Solar System. They have already flown past Mars and are now around 220 million miles (350 million km) from the Sun, which will put the temperatures far too low for Philae to work.

Nevertheless, even though there may be a slim to no chance of ever hearing from Philae again, Rosetta continues to listen for signals from the lander as it flies along side Comet 67P.

The fact that Philae could even make a landing on the comet is something the scientists, researchers and engineers can all be proud of and with more time, they are sure to have a successful journey on one of these mysterious space rocks.