Like the hot wax floating up in those retro lava lamps, the midst of Pluto’s “heart” is bubbling up with warm solid blobs of nitrogen.

Scientists have now discovered that Pluto’s surface is constantly renewing itself by a process called, convection.

The area known as Sputnik Planum on Pluto is covered with churning young “ice” cells that continue to spit-up new ones at the “heart” of this planet.

Thanks to the combining of computer models with topographic and compositional data gathered by NASA’s New Horizons spacecraft in July 2015, team members have been able to determine the depth of this layer of solid nitrogen ice and how fast that ice is flowing. In fact, the research shows these cells are ranging in size from 10 to 30 miles across (16 to 48 kilometers) and are estimated to be less than a million years-old. 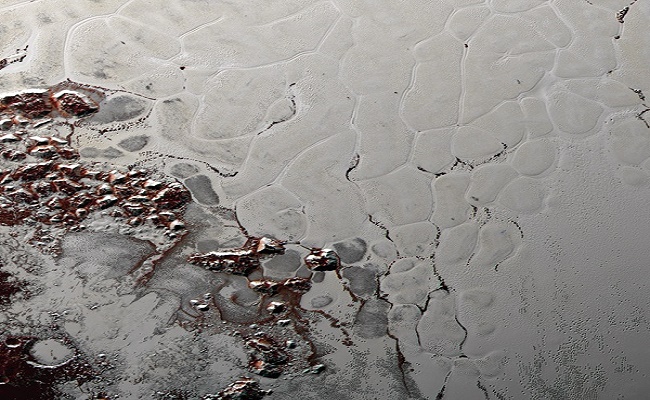 The scene above, which is about 250 miles (400 kilometers) across, uses data from the New Horizons Ralph/Multispectral Visible Imaging Camera (MVIC), gathered July 14, 2015.
Photo Credit: NASA

William B. McKinnon from Washington University in St. Louis feels that for the first time ever, they can determine what those strange welts are on the surface of Pluto. They have even uncovered evidence that shows although planets can be located billions of miles away from Earth, they can still produce enough energy to create vigorous geological activity….of course, you need the “right stuff.”

The soft and pliable nitrogen that McKinnon and his colleagues feel are most likely buried several miles deep in the dwarf planet. The solid nitrogen under the surface is being warmed by Pluto’s modest internal heat. It then becomes buoyant, and rises up in great blobs — like a lava lamp — before cooling off and sinking again to renew the cycle.

The computer models have given scientists the data that demonstrates the broad convection cells turning into blobs and how the continuous overturning of these blobby-bits can evolve and merge over millions of years. This would account for the ridges that mark where cooled nitrogen ice sinks back down. It becomes pinched off and abandoned, resulting in Y- or X-shaped features in junctions where three or four convection cells once met.

According to a statement made by Alan Stern of the Southwest Research Institute in Boulder, Colorado;

“Sputnik Planum is one of the most amazing geological discoveries in 50-plus years of planetary exploration, and the finding by McKinnon and others on our science team that this vast area — bigger than Texas and Oklahoma combined — is created by current day ice convection is among the most spectacular of the New Horizons mission.”

Although, on Earth time the overturning of these cells may seem super-slow (cells recycle themselves about every 500,000 years) it is very fast in planetary-terms.

“This activity probably helps support Pluto’s atmosphere by continually refreshing the surface of ‘the heart,'” McKinnon said. “It wouldn’t surprise us to see this process on other dwarf planets in the Kuiper Belt. Hopefully, we’ll get a chance to find out someday with future exploration missions there.”

New Horizons is set on course for an ultra-close flyby of another Kuiper Belt object, 2014 MU69, on January 1, 2019 (pending NASA approval of funding for an extended mission).

Hopefully, the mission will give scientists even more knowledge of the mysteries just waiting to be discovered. And perhaps, it may even turn up more evidence of new planets or even take a close up look at some ancient objects.

Want more of Pluto? Check out this video for an up close look at this dwarf planet’s varying surface.