In 2022, NASA plans to launch a new spaceship to stay in lunar orbit. Read on to learn more.

The International Space Station has orbited the Earth with astronauts since 2000. NASA now plans to have a spaceship continuously orbiting the moon starting in 2022. The spaceship Gateway is currently in production. Why not just build a space station on the moon? They plan to do that as well. However, they want the space station to be a deep space station. This is out of the comfort zone of Earth’s low earth orbit.

The Gateway spaceship will not be as large as the International Space Station. The international space station is similar to a six- room house. This Gateway will actually resemble a two bedroom apartment. Two astronauts can stay in the spaceship for up to 90 days at a time.  During that time, they can take trips to the moon’s surface. The proximity of Gateway will significantly increase the ability to learn more about the moon. Scientists want to see more about the Earth’s presence in space. What will it do when astronauts are not on board? Even without crew present, cutting-edge robotics and computers will operate experiments inside and outside the spaceship. Furthermore, the computers will automatically be returning data back to Earth. NASA will also use lasers to transmit large amounts of data and not radio waves. 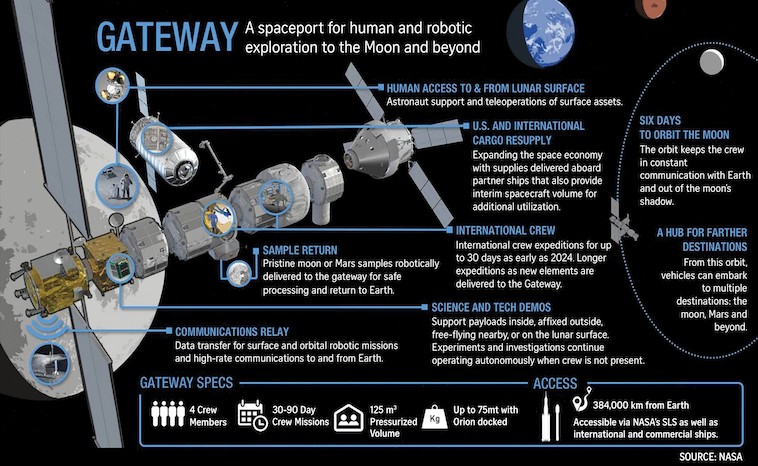 NASA received extensive support from the International Astronautical Congress when they presented the design in October of 2018. The international community sees this as another step toward getting to Mars. Getting the astronauts to and from the spaceship will take some planning. NASA plans on using reusable landers to shuttle between Gateway and the Moon. In addition, they plan to use Gateway as stepping stone stop off for future Mars trips. For example, the Gateway can provide a fresh tank of fuel or replace broken parts. It can serve as a supply station for things like food and oxygen. How do they plan to build Gateway in space?

NASA plans to build the Gateway with just five or six rocket launches. The International Space Station took 34 rocket launches to build. In addition, it took 160 spacewalks to complete the entire structure. NASA will use the Orion crew transport ships to get astronauts to space for the initial build.

“We will send up large parts of the Gateway on multiple rockets for automatic assembly in space. Some parts may be sent on private rockets, but NASA’s SLS rocket will deliver most. Orion will push them the hundreds of thousands of miles to Gateway. “ (NASA, 2019)

While NASA focuses on getting the spaceship into lunar orbit, other companies are working on living quarters. NASA has a commitment with international countries in pursuing space exploration together. They want international space agencies to work together to provide expanded living space, advanced robotics, transportation, and science capabilities.  Just as the International Space Station depends on cooperation from several countries, the Gateway space station will rely on the same.

NASA has started building the parts needed for Gateway. They plan on launching the first two principal components in 2022. Once the communications system is running and its propulsion system works, it will be ready for astronauts. They plan to send four astronauts to Gateway to get everything up and running. NASA plans to send astronauts each year and hopes for a 2026 completion date.