Here’s your chance to see five planets all in a row, but hurry, as this spectacular show is for a limited time only!

From now (February 3rd) until around Valentine’s Day, five planets (Mercury, Venus, Saturn, Mars and Jupiter) will be aligned for perfect viewing in the wee hours of the morning. The last time this happened was late December of 2004 to early January 2005. 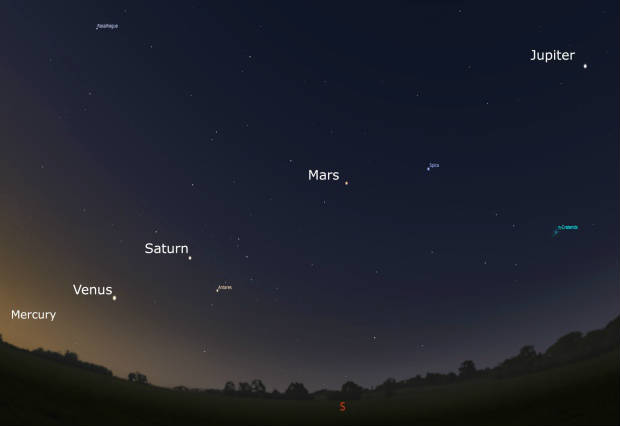 The Arc of the Ecliptic

The Moon will thin this week to a Crescent and will meet Mercury in conjunction two days before it phases in the New Moon. If you look out tonight (Feb 3rd) you will catch Mercury, which will crest around 7° altitude (from 40° N) but take a peek before twilight or it will be lost. According to Sky & Telescope;

The planet has been pushing west into the morning sky since late January, rising a little higher each morning. Come Saturday (February 6) it reverses direction and traipses back toward the Sun.

Interestingly enough, the planets follow the arc of the ecliptic, which is the plane of Earth’s orbit projected as a line into space and traced out by the Sun once a year. This is a rare occurrence and really shows the flatness of the Solar System, so it’s well worth the look.

When planning the best view for this cosmic show, find a wide-open area to the South and Southeast–this is where the lower-lying planets of Venus and Mercury can be seen. However, this show is for the early-riser as you should be getting set up about 1.5 hours before the sun rises (at the first hint of dawn) for the best viewing.

Once set up look relatively high in the Southwestern sky for Jupiter. It will be very bright, so it should be easy to spot. Once you locate this big fella, raise your arm up and make a fist, then count over three-fists to your left where you should arrive at Spica (Virgo’s most luminous star). Now move to the left or East with two fists to locate Mars. Two fists further left (east), you’ll bump into reddish-colored Mars. But don’t be fooled by a fainter star located around 1° to the lower right of the planet. That’s Libra’s second most luminous star, Zubenelgenubi, which sits almost directly on the ecliptic.

To find Saturn (and Antares) move almost three-fist widths to the East while dropping southward; Saturn’s the brighter and higher “star.” Now move another three-fists east and south which will bring you to Venus. Lastly to locate Mercury it will be visible just three fingers (or 5 degrees) farther east and south.

Don’t miss this spectacular alignment of these planets. Grab your friends and family and go out to see what our wonderful world has to offer.