Dennis Tito, the first cosmonaut-tourist, flew into space in 2001 on the Russian Soyuz spacecraft. For ten days of weightlessness, he paid Roscosmos several tens of millions of USD!

Tito was the first of his kind, the first non-professional in space. After him, space tourism, space fliers – amateurs, increasingly followed in his footsteps. After all, this is a flight into the Earth’s orbit, only a few hundred kilometers above our heads.

Dennis Tito is an aeronautics and astronautics engineer by profession, he subsequently obtained a master’s degree in technical sciences.

He was once a scientist and employee of the space agency NASA and participated in calculating the flight paths of three missions to Mars during the 1960s.

In the early 1970s, he founded the Wilshire Associates company, which was engaged in consulting in the field of investments, thanks to which Tito became a multimillionaire. His wealth is also evidenced by the fact that he paid 20 million dollars to become the first space tourist.

He came up with this idea for the first time in 1991, during his stay in Moscow, when he negotiated the possibilities of traveling and staying at the Mir orbital station. When the conditions for something like this were created in 2000 and while he was extensively preparing for a trip to space, the Russian government was forced to make a decision to demolish the station.

After 14 years in orbit, Mir was increasingly outdated and expensive to maintain. In this way, the idea of a trip to Mir also failed, but soon a new one appeared – Russian officials offered the American businessman a flight with the Soyuz rocket to the International Space Station.

In addition to the two cosmonauts, the plan was for Tito, who was persistent in his intention to become a cosmonaut, to be in the spacecraft that was transporting the necessary equipment to the station. There was a dilemma whether NASA, a partner in the project, would allow something like this.

In the end, the Americans allowed their citizens to go into space, on the condition that they sign a document releasing any space agency from responsibility in the event of an accident or any problems.

Sixty-year-old Denis Tito, after 900 hours spent preparing for the flight, will become the first space tourist on April 28. He will spend 10 days in space, visiting the International Space Station, but only its Russian part, since NASA demanded that he stay away from the American module. The American space agency’s reluctant consent may be due to the fact that the first and only attempt to send civilians into space had a tragic epilogue – in 1986, teacher Christa McAuliffe was among the crew of the Challenger space shuttle that exploded.

On Friday, April 28, 2001, the entire crew flew to Central Asia to the cosmodrome where, according to protocol, they had a shower, a final medical examination, measurement of blood pressure and body weight.

Then followed a massage with towels soaked in disinfectants, getting dressed and having breakfast together. And for breakfast, every cosmonaut has the opportunity to choose a dish of their choice – with the obligation not to overeat because take-off and adaptation to weightlessness causes nausea.

After the breakfast, there is a farewell ceremony and a glass of champagne with a small circle of friends. For preventive reasons, they also undergo a medical examination.

The tradition continues to include taking photos of the crew with their guests. This is followed by a short drive to the control building where the cosmonaut suits are put on, a short press conference is given – “I feel better than ever,” said Tito. 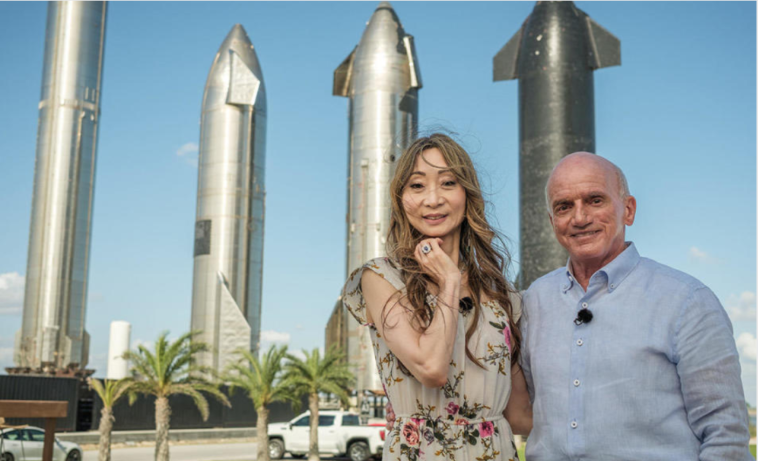 On October 12, 2022, Dennis Tito and SpaceX announced a business deal that will see Dennis Tito and his wife Akiko fly together to the Moon on the second mission of the large Starship spacecraft.

At this time, it is too early to forecast the launch date of the mission in which Dennis and Akiko will fly together, land and return from the moon.