When we look at the moon we see a rocky surface filled with impact basins. Could the moon at one time have an atmosphere? If it did, how does that information help us now? Read on to learn more about the moon and its atmosphere.

The moon went through four stages of development over billions of years. Scientists believed that it never had an atmosphere. New research from Nasa now shows that the moon may indeed have had an atmosphere at one point.

At one quarter the diameter of the Earth, science has held the belief that the moon could not hold an atmosphere.  They know that it did not have surface water, and its interior cooled rapidly, as its internal heat flowed outward into space. Small objects have less heat and lose it more rapidly. The moon’s small size has been critical in determining its history. Forming in a molten state, the moon at one time had a magma ocean. Denser materials sank to the bottom of the magma, and as it cooled, a low-density crust formed.

After the crust cooled, the moon endured heavy bombardment from meteors. The moon’s crust shattered, and the largest impacts formed giant multi-ringed crater basins hundreds of kilometers in diameter. Astronomers calculated that the tremendous impacts that formed the lunar basins would have cracked the crust to depths of 10 kilometers. This cracking led to flooding.

Flooding on the Moon

As a result of the crust cracking under heavy bombardment part of the crust remelted. Consequently, it produced lava that followed the cracks up into the giant basins. Studies of the moon show that its crust is thinner on the side toward the Earth. Presumably, this results from tidal effects. While lave flooded into the basins on the Earthward side, it did not create a thicker crust on the far side. 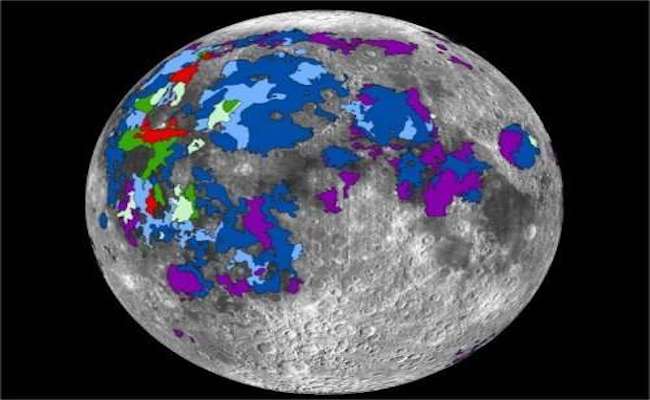 Did The Moon Have an Atmosphere?

New research from NASA’s scientist, Dr. Debra H. Needham, believes that the moon may at one time had an atmosphere. She calculated the amounts of gases that rose from erupting lavas as they flowed over the surface. It showed that those gases accumulated around the Moon to form a transient atmosphere. Consequently, the atmosphere was thickest during the peak in volcanic activity about 3.5 billion years ago. She believes that it stayed with the moon for about 70 million years before being lost to space.

Closeness to the Earth

Another NASA researcher makes an observation regarding the moon’s location. David Kring, NASA researcher states,  “This work dramatically changes our view of the Moon from an airless rocky body to one that used to be surrounded by an atmosphere more prevalent than that surrounding Mars today.” Furthermore, when the Moon had that atmosphere, it orbited nearly 3 times closer to Earth. It also appeared almost 3 times larger in the sky.

The researchers also found that chemical elements (Volatiles) may exist near the lunar poles. Volatiles contain nitrogen, water, carbon dioxide and hydrogen. The volatiles may have become trapped in these cold polar regions and contain ice. Therefore, they could provide air and fuel for astronauts while they explore the lunar surface. Researchers have spent the last decade looking for volatiles within the moon and on the surface of the moon. Finding them on the moon will help NASA develop sustained lunar surface activities. With assistance from NASA’s Resource Prospector robot, the chances of finding volatiles become increased.

Scientists have held the belief that the moon never had an atmosphere. With this new research from NASA scientists may one day tell us for sure that the moon did indeed have an atmosphere. Each discovery leads to new discoveries and one day we may have a permanent lunar site established on our moon.