NASA’s Curiosity rover has found evidence of a massive flood on the red planet. Read on to learn about the visual evidence obtained by Curiosity.

A new report from researchers has indicated that Mar’s Gale Crater may once have been a lake. The researchers who wrote the study used information obtained by NASA’s Curiosity rover. The rover has traveled along inside the crater since 2012. Scientists chose Gale Crater as the landing site for Curiosity because it has many signs that water was present over its history.

What evidence do they have that a Megaflood formed Gale Crater into a lake? Sediment structures in Gale crater indicate that megafloods occurred there around 4 billion years ago. Sediment is any particulate matter that can be transported by water flow. Eventually, the sediment becomes deposited as a layer of solid particles on the bed or bottom of a body of water.

Along with the sediment, they also found symmetrical gravel ridges. Each ridge stands 32.8 ft (10 m) high. Researchers measured the distance between the crest of each ridge. They estimate that the ridges were created by floodwaters at least 24 m (78.7 ft) deep and traveling at upwards of 10 m (32.8 ft) per second. Upon closer inspection, they concluded that the ridges were antidunes. Antidunes are river bedforms made by very fast-flowing water.

“We identified megafloods for the first time using detailed sedimentological data observed by the rover Curiosity,” says Alberto G. Fairén, co-author of the study. “Deposits left behind by megafloods had not been previously identified with orbiter data.”

Scientists have seen this type of gravel ridge formation here on Earth. A study written in 1932 by George A. Thiel describes the formation of giant current ripples formed by fast-moving water. In Ely, Minnesota, a high-velocity stream drained a glacial lake. Large asymmetrical current ripples formed from coarse gravel on the floor of a gorge-like channel during that event. Within a few hours, the ripples formed wave-lengths varying from 25 to 60 feet. This observation later led scientists to calculate antidunes, sedimentation deposit rates, and ridge formation. 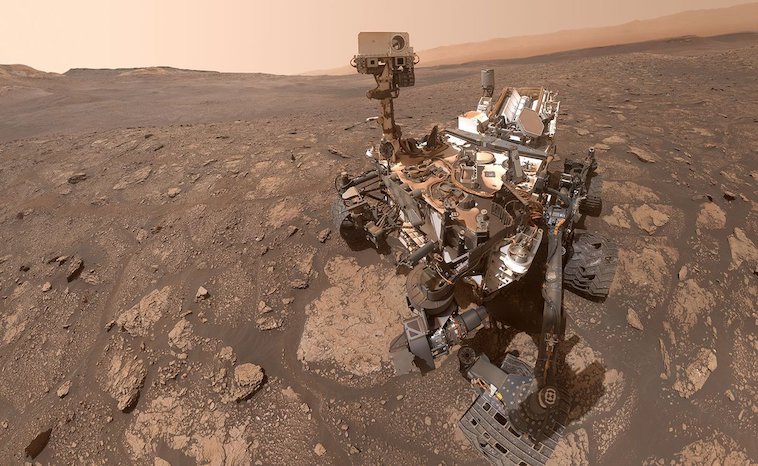 Causes of the MegaFlood

What prompted a flood of biblical proportions? The researchers believe a huge impact by an asteroid may have melted ice on the red planet. As a result, huge amounts of water vapor, carbon dioxide, and methane went into the atmosphere. At this point, it rained and rained. So much so that Gale Crater became a lake.

The Curiosity rover science team established a while back that Gale Crater had persistent lakes and streams in the ancient past. These ancient bodies of water may carry evidence that the crater and Mount Sharp within it, supported microbial life.

“Early Mars was an extremely active planet from a geological point of view,” Fairén said. “The planet had the conditions needed to support the presence of liquid water on the surface – and on Earth, where there’s water, there’s life.”

Now it will be up to NASA’s Perseverance rover to find microbial life. Perseverance launched from Cape Canaveral on July 30, 2020.  It is scheduled to land inside the 28-mile-wide (45 kilometers) Jezero Crater on Feb. 18, 2021.  NASA chose this site for Perseverance because it shows clearer signs of a watery past when viewed from orbit.