We’ve been to the moon and we’ve been to Mars, so now scientists are putting a proposal together for NASA to take spacecrafts to the icy giants of Neptune and/or Uranus. Impossible? Not at all!

By the end of this year (2016), Mark Hofstadter (NASA’s Jet Propulsion Laboratory) and his team will create a list of science goals for a mission to Uranus and/or Neptune. In doing so they will provide the space agency with an initial game plan for what such a mission would look like. They already estimate that this mission would cost less than a cool 2 billion, making it the biggest and most expensive of its kind and would be set to fly sometime between 2023 and 2035.

Although, these ice giants were explored up close for a matter of days in the 1980’s, it wasn’t near enough time to collect the data and images that would be needed to make any real discoveries.  Hofstadter makes this statement;

“The ice giants are an unusual place. They are dynamic. They are changing on human timescales. They have a lot to tell us about our solar system and our galaxy because this type of planet is the most common.” 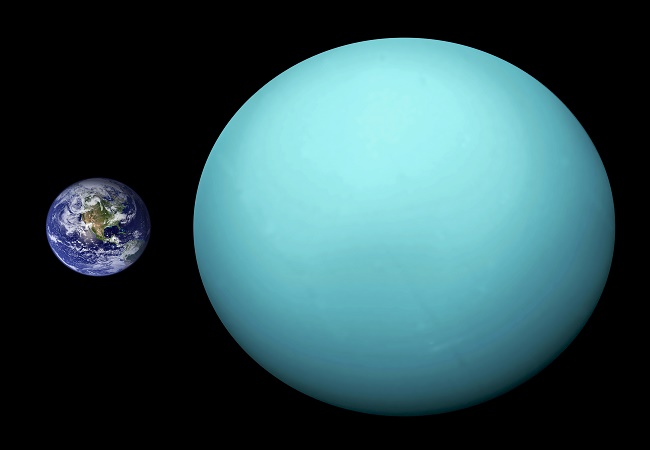 Uranus and Earth in comparison.

Yes! You read that right. Researchers are now discovering these Neptune-size worlds are abundant throughout the Milky Way, with twice as many of these icy wonders as Earth-size ones.

Astronomers still don’t fully understand the structure of ice giants in our own solar system. We know that Jupiter and Saturn are mostly gas and Earth and the terrestrial planets are mostly rock. However, Neptune and Uranus are entirely different, consisting of about one-third rock, one-third ice, and one-third gas. In addition, these materials don’t even seem to be fully segregated. Once again Mark Hofstadter has a statement;

“One way to think of these planets would be you can take a big, rocky planet several times the size of Earth, and then put 10 Earth masses of ocean around it, and then a little bit of hydrogen and helium on top.” 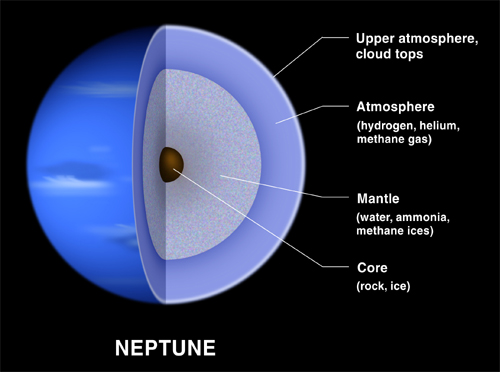 Researchers have pretty much figured out Jupiter and Saturn, but due to the lack of date from the ice worlds, more research is needed before we can fully understand what Neptune and Uranus are really all about.

Scientists are making a case for this fascinating mission because of some specific properties of these planets that need to be studied. For example both planets have rings and moons that are unique. While scientists aren’t certain what makes up Uranus’ ring particles, they look way too dark to be pure water ice like Saturn’s rings. And Neptune’s moon (Triton) is the only large satellite in the solar system with an orbit that runs opposite from the way the planet spins.

And most likely Triton was a captured Kuiper Belt object just like Pluto. In addition, it exhibits a cantaloupe-like terrain with billowing plumes of steam that could hint at an active world and possibly a subterranean ocean.

Unfortunately, the team needs to come up with a solid plan to study these far-off worlds.

“You cannot (currently) fly a single vehicle from Uranus and then to Neptune. The planets are just not aligned properly to do that.”

For this reason the team is studying a single spacecraft that would go to one planet or the other. Plus, they are also pondering a plan that may be able to send two spacecraft — one for each ice giant — something that’s never been tried before.

In the coming weeks, the team will identify the top science goals for their spacecraft and in the months to follow they’ll identify roughly 10 different potential mission architectures to meet those science goals. By fall, Hofstadter states he expects to report back to NASA with an initial strategy.

Whatever the final architecture, NASA’s plans to visit an ice giant should crystallize by year’s end. What an exciting time to be alive!